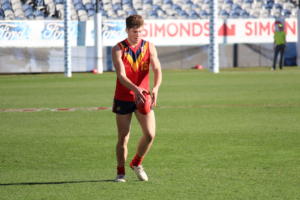 DRAFT ANALYSIS: "A strong and hard working inside midfielder who is a classy ball user, who excels in clearance work and is a high possession winner."

HARRY Schoenberg is certainly a player not many clubs or recruiters would have known much about coming in to season 2019. Not being selected as part of South Australia’s initial training squad in November 2018, the Eagles midfielder has taken all before him to rocket up into draft contention. Starting the year in SANFL Eagles Under 18s side, he quickly became one of the dominant midfielders in the competition and pushed himself into the South Australia Under-18 squad. After his selection and then going to the Under 18 National Championships Schoenberg excelled and was rewarded with South Australia’s best player of the Carnival and as well as an All Australian selection from the carnival. The remainder of the year saw Schoenberg settle into the Eagles Reserves midfield for the remainder of the year and also Reserves Grand Final.

Schoenberg’s games all year have shown he excels inside the contest and is clean and smart around stoppages, and a continued first ball getter for his sides. He has shown he can be deceiving quick even though he has a strong frame, and makes good decisions whilst in traffic. He is certainly a ball accumulator which comes from a willingness to work from contest to contest, but also his footy smarts making him often in the right position to receive or win his own ball. With an average over the year at SANFL level of 20 possessions, five clearances and four tackles, shows that Schoenberg can find the footy and his efficiency with ball-in-hand was 63 per cent, which although it was about average, does not reflect how damaging and important he was for his teams.

Schoenberg was a key contributor for South Australia at the National Under-18 Championships lining up both as an inside midfielder and also pinch hit up forward. His ability to burst from stoppages was on show, as although his combine tests for 20m sprint were lower than others, in game he seems to often have given himself space. Having clean hands below his knees has been obvious in games which allow Schoenberg as a first user of the ball to be highly effective, and he has obvious footy smarts on where to go around the ground.
At the National combine his agility testing was excellent, and he was consistent in other areas without being a standout. It is reflective of his game style that he is just a strong contested player, who is hard to tackle and evasive in traffic, but he will work all day. With a lift in his endurance inside an AFL environment he could develop this side of his game even more, and then allow him to push forward to gain even more value for his possessions.
There has been similarities made to AFL player Jack Steven by certain commentators to date, and some of his attributes are clear, which adding a higher level of speed and endurance work Schoenberg could become a player of that level. A safe inside midfield contested option and clubs will know what they get in ball winning, with an opportunity ot expand his game even more