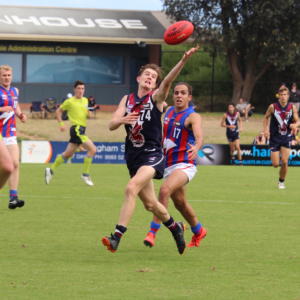 THE Sandringham Dragons utility was a late comer in season 2019, picking up the #74 jumper left by Nathan Murphy a couple of years ago and playing a similar role at both ends. He uses the ball fairly well and covers some serious ground, is just a raw prospect trying to find his best position and having more of an impact against the stronger sides with consistency. His athleticism is a massive strength, recording very impressive times at the Rookie Me Draft Combine which included a 2.96-second 20m sprint, 8.22-second agility test and 21.3 yo-yo test. Being a lighter bodied player, Loughnan has to build his strength and improve his competitiveness in the air once he has the extra strength, but what he can do with ball-in-hand and at ground level is what makes him stand out on the football field.

DRAFT CENTRAL’S INTERVIEW WITH HARRY LOUGHNAN AT THE 2019 ROOKIE ME DRAFT COMBINE: