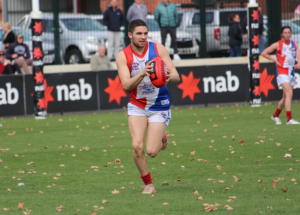 ONE of Hawthorn’s Next Generation Academy players, Pepper enjoyed a role change in 2019, moving from attack to defence and representing Vic Country this year. He has great competitiveness and hates to be beaten, with good speed and the versatility to play in multiple positions. His kicking can be a worry at times, and he still needs to build endurance, but Pepper has a hard edge to his game. The fact Pepper takes the game on when coming off half-back is a positive and with a 2.95-second 20m sprint, he has the great combination of speed and power to break through opposition tackles charging down the field. Hawthorn have been closely monitoring his progress and his change in role this season was aimed for him to play a similar game to the Hawks’ young defender Blake Hardwick who like Pepper, transitioned from forward to defence. While he knows his improvements, his strengths are also attractive to an AFL club.