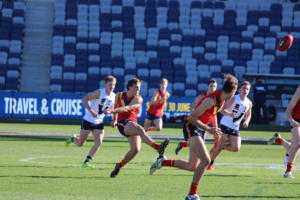 THE inside ball winner from North Adelaide was a ray of consistency in the Under 18s this season, amassing more than 28 disposals, seven clearances and eight tackles per game to be a valid inside midfield option in the AFL Draft. He is just a natural ball-winning midfielder with a taste for contested work. His inside game is very strong, however his outside game and skills could further improve. Once he is able to use the ball a little better and apply greater scoreboard impact, Magor could be a two-way impact player. Similar to Tom Lewis last year, the South Australian did not do too much wrong in terms of his natural game, it is just adding extra strings to his bow. In 11 games for the Roosters, Magor won almost half of his possessions in the contest, and averaged a massive 116 AFL Fantasy points for those interested in potentially grabbing a late bargain if he can make it onto an AFL list. In his two games at Reserves level, Magor averaged 11.5 disposals and 2.0 clearances.