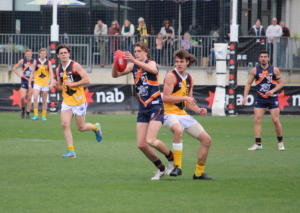 DRAFT ANALYSIS: “An athletic and developing player who can play in a range of positions because of his height and leap and has shown great dedication to any role he plays.”

HARRISON Jones emerged as a potential top 30 prospect after a promising showing at the AFL Under-18 National Championships playing as a key forward and showing his impressive lead up ability to take marks up the ground but also compete well at ground level. Jones spent time as a ruckman in his bottom-age year, and despite his height at 194cm, he did well because of his leap and great touch. He moved well at ground level and was not afraid to tackle either. Although he will not play as a ruck at AFL level, he will have some value to at least pinch-hit. Jones is very light so he has plenty of development left and with his application to various roles he could become anything, with a few clubs maybe going earlier than first thought because of his upside and lack of key position players in the 2019 draft.

Jones has a very nice leap and sticky hands once he gets a run and jump at the ball and his timing to jump is often perfect which would have come from his time rucking and you can tell it helps him also be creative with little tap ins and such inside 50 which can set up scoring opportunities. He has played mostly forward this year but with his athletic abilities he could play a range of roles and that would excite recruiters as a developing player that could become anything and with his strong marking and athleticism he could play on different types down back while also being a hard matchup as a forward. Jones is a willing tackler so he has the defensive pressure needed for the modern game and its always good to see young talls putting pressure on and sticking tackles and this was highlighted with an eight-tackle game against the Dandenong Stingrays late in the year. Jones tested well at the combine excelling in the vertical leap and yo-yo test and although the leap test is not a surprise the yo-yo was good to show his work rate and how he could become a talented lead-up forward at AFL level, he also tested well over 20m just to round out his fantastic athletic profile.

Jones is a player that is rated for his athletic profile and potential more so on his statistics and goals kicked as a forward, Jones only kicked four goals in the NAB League which certainly is not anything to write home about and although its good to play a high role as a forward and put on pressure he will need to kick more goals and win a bit more of the ball consistently to be a truly damaging player at the next level. Jones moves well for his size and uses the ball well more often than not so an improvement in winning more of the ball can only benefit him and his team. Jones is a raw prospect at 194cm and 75kg, and he will need time to develop his body before he plays consistent football at the next level, its always hard to judge contested marking in young players as it’s something usually developed through gaining experience and strength and gaining this skill could really set Jones apart at the next level and his tackling is already strong so wth some added size he could really stick them and potentially be an imposing player down the track.