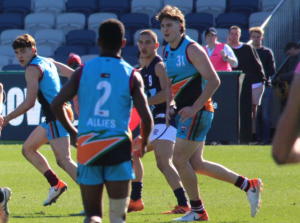 A key position forward who can pinch-hit in the ruck, the Sydney Swans Academy member produced a strong Under-18 carnival for the Allies. While he missed a lot of chances he should have nailed in front of goal, he was almost like a small forward in a big forward’s body, able to crumb the ball well at ground level and hit the scoreboard whilst being a dominant contested mark. For a 105kg monster forward, Ellem is unbelievably quick, recording 3.01 seconds on the 20m sprint at the State Draft Combine. Though this was countered by an understandably slow 9.36 seconds on the agility test. His ground level work is more his body positioning and smarts rather than movement, though having that breakaway speed is also handy. If he can improve his set shot goal kicking and continue to work on his endurance, he could be a value rookie selection with the Sydney Swans.