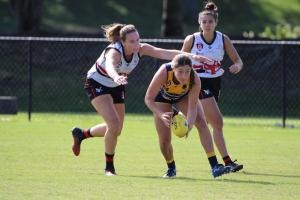 Giselle Davies is a key defender who is capable of playing up the other end of the field, but is a strong member of the Gold Coast Suns Academy. Holding down the fort often on the last line, Davies is one who can nullify an opposition tall, standing at 180cm to be able to match most players in the air one-on-on.

While Giselle Davies is so adept at locking down on a key position opponent in the back 50, she does have the reliability by hand or foot to hit targets through good decision making out of the defensive half of the ground. The big area of improvement for Davies is her offensive ability, because she is able to use the ball well, but is so focused on beating her opponent that she does well, that she can add more strings to her bow when attacking down the ground and generate some more run of the back 50.

Along with her offensive output, Davies could also improve her contested marking, which is an area she is working on currently. Once she is able to clunk more grabs in the air and look to generate more drive, her offensive output could match her impressive defensive output. Right now, Davies is a potential Suns recruit, with her consistency in the defensive 50 something that would impress the club. She is able to beat her opponent each week, and coaches know what to expect out of her. She does not need to win much of the ball to have an impact in the role she plays, and that is what makes her a valuable prospect as a defender going forward.

“I started playing footy a few years ago, my best friend Annise Bradfield got me down to play. “I was playing heaps of touch football (and) netball, I went to a footy session and it was just a perfect mix of both of those sports. I loved it from there. I have loved every single part of playing with the Gold Coast Under 19s Academy. We did heaps of work in the off-season after last year – pre-season training in the heat, gym, running, just loving it. I’m really grateful that we have the academy that looks after us so well. There’s all this new talent coming through the pathway, it’s just amazing that they really give you a perspective on what you could have and what you’re working towards.” – Giselle Davies via “Rising Sun Davies learns from the best”