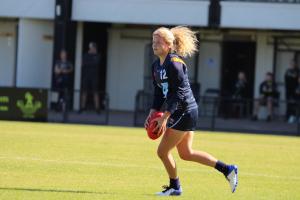 Winning the NAB League Best and Fairest as a 16-year-old against the likes of Georgia Patrikios, Gabby Newton and Lucy McEvoy, Georgie Prespakis came into 2021 as possibly one of the most well known underage female prospects ever. With a natural ability to find the footy, and the versatility to do it anywhere on field, the Pick 1 contender is bound to have a big impact at the next level as soon as she’s on a list.

The Calder Cannons product, and sister of Carlton’s Maddison, was unsurprisingly one of the premier players in the NAB League in season 2021, coming into the season as the early favourite for the number one Victorian pick after her stellar form in the prior two seasons.

Her biggest strength came from her work around stoppages, able to be that first possession winner from the ruck tap when required, but equally adept at being a receiver from the stoppage and kicking forward or handballing off to release further runners, with her hands in close nearly unmatchable by opponents. Never neglecting defensive work, Prespakis averaged 8.7 tackles a game, demonstrating her high level work rate around the ground. At times she would plug a hole down back or up forward to a high level as well, playing as a kick behind the play defender to still provide drive forward when it was required, or as a high half forward.

Through her Vic Metro duties at the AFLW U19 Championships, she continued her high level production averaging 28 disposals and 8.5 clearances across her two games as she led the way for Metro through the midfield. After the Calder Cannons were knocked out in week 1 of finals against eventual premiers Oakleigh, Georgie went on to make her debut for Essendon in the VFLW.

Prespakis’ kicking, whilst not bad, could do with some refining in future, as she often snaps around the body out of stoppages rather than straightening up and kicking through it to get consistent penetration behind the ball. She doesn’t have this same issue when in open play however, when she is given time and space she often gets good penetration and placement with her kicking, helping the forwards by putting it in front of them to run onto and take on their chest without issue.

“Georgie Prespakis showing her talented skills throughout four consistent quarters, with ending up with 14 disposals, 10 tackles, nine clearances and two inside 50s. The promising young talent showed her game smarts are a level up from what she is used to playing, and playing with and against senior opponents who have already had the taste of playing the top level. The athleticism shown from her from a tough game shows a really exciting and bright future for the young talent becoming something real.” – Brooke Hards via “VFLW Player Focus: Georgie Prespakis (Essendon)”

“The most consistent prospect across the board and has been touted as a star from her debut as a 15-year-old two and a half years ago. There she dominated up forward with 13 goals in 10 games, averaging a massive 22.6 disposals and 5.6 tackles to win the league best and fairest at just 16 years of age. Her numbers have remained consistent going into the middle, and whilst she almost always gets close attention from the opposition, Prespakis is a renowned tackler with 8.8 per game in her top-age season. Her ball winning ability and strength to win the pill at the stoppage and extract it away, as well as have an impact forward of centre, are among her strengths. In terms of improvements, sometimes she can rush the kicks around her body, but she is able to get to enough repeat stoppages, to have more influence than most others.” – Peter Williams via “Draft Central AFLW Draft Power Rankings – Victorian Pool: June 2021”

“Arguably the best player available in this year’s draft pool, Prespakis enjoyed another stellar season in Calder colours, as captain. Having already set a ridiculously high standard, the midfielder was able to meet it each week and was a reliable asset at each level she played. Her understanding of the game and ability to win the ball is unmatched, with the defensive acumen to go with that penetration going forward. She is a superstar in the making and will quickly shake the ‘Maddy’s sister’ tag – if she hasn’t already.” – Michael Alvaro via “2021 NAB League Girls team review: Calder Cannons”