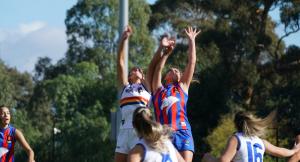 Putting in an impressive 2021 season for the Eastern Ranges, Campbell stamped herself as one of the premiere rucks in the NAB League Girls competition with her impressive leap and tap work proving highlights of her game. She’s outstandingly clean at ground level for her height, following up after hit-outs to play almost as an extra midfielder.

Campbell is perhaps one of the biggest upside prospects in the draft, with her athleticism regularly allowing her to beat taller and stronger opponents both in the ruck and when playing forward. She’s bound to improve into a dangerous option in either position as she refines some of the other aspects of her game, as her transition from other sports such as basketball, cheerleading  and high jumping becomes more complete.

Her consistency in executing skills, particularly kicking, is one of those areas that she will continue to improve on at the next level. Whilst not overly concerning, her kicks can at times lack penetration or look rushed, particularly from stoppages. Her ability to get possession of the ball is quite impressive, competing well in the air and reliably holding marks, while also meeting the ball at the highest point she can. She’s also able to follow up strongly at ground level when required, getting the ball out quickly by hand.

At the AFL Women’s Under 19 Championships, Campbell played the majority of her time in the clash against Vic Country in the ruck, where she was challenged more than she usually was at NAB League level in the contests, but was unmatched in her follow up work and impact around the ground. She spent the second game against Western Australia playing mostly in the forwardline, causing headaches by leaping high every time the ball came in her area, and bobbing up with a goal on the run in the third term to demonstrate her impressive evasiveness and one-on-one ability. Eastern Ranges bowed out to the Oakleigh Chargers in the NAB League Girls Preliminary Finals, where Campbell still managed to register a game-high 27 hit-outs despite the loss.

Campbell is one of very few prospects that will have some degree of certainty going into the AFLW Draft, meeting the criteria to be a father-daughter selection for both the Western Bulldogs and Melbourne, where her father, Adrian, played 30 and two games respectively. If Campbell opts to nominate either club, they will certainly be thrilled with the promising prospect at their disposal.

“The upside for father-daughter eligible prospect Georgia Campbell is quite impressive, with the talented ruck able to rest up forward for parts during games due to Eastern Ranges’ abundance of rucks… she has great mobility for a ruck and can get around the ground and be an option, and also provide a good presence when inside 50 which makes her difficult to contain.” – Peter Williams via “AFLW Positional Analysis: Rucks”

“A real bolter in this year’s crop, Campbell quickly established herself as one of the premier talls of the competition with her dominant work for Eastern in the ruck. The 182cm prospect is as athletic as they come, able to thrive aerially but also compete at ground level and confidently run the ball forward.” – Michael Alvaro via “NAB League Girls season review: Eastern Ranges”

“Campbell took advantage of her superior athleticism in the ruck to win almost every ruck contest she was involved in, with a game high 27 hitouts being her biggest return for the year. Even though she did not win a whole heap of ball around the ground, her follow up work around stoppages was impressive, getting low a few times and firing out handballs to teammates running past.” – Declan Reeve via “Top Performers: NAB League Girls Preliminary Finals”

“Campbell shared the ruck duties with AFLW Academy tall, Tahlia Gillard, but was most impactful during her time as a key forward. Her mobility and attack on the ball stood out as really high-end traits which will continue to raise her draft stocks in 2021, especially if she can also continue to hit the scoreboard. Whether it was competing in the air or crashing ground balls, Campbell was a much-needed physical presence up forward for Metro, and looked natural on a line which saw plenty of players contribute slightly unfamiliar roles.” – Michael Alvaro via “AFLWU19s Top Performers: Vic Country vs. Vic Metro”