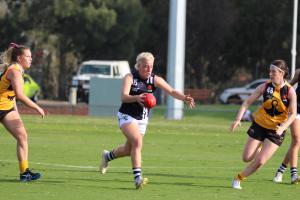 Gabbi Featherston is a raw talent with plenty of upside to accompany her eye-catching traits. Playing as a high half-forward and much taller than her 169cm height, Featherston has such a leap she can also play as a ruck. Overall, Featherston is one to watch for the future having developed plenty in 2021.

Among the more surprising roles this season, Gabbi Featherston’s ability to step up into the ruck role and showcase her vertical leap against far taller opponents is something that certainly caught the eye. Featherston has safe hands which she uses to clunk marks, but is also an athletic player who can play against tall or small opponents, and play high or deep inside 50. She has been known to push up the ground to take ruck stoppages if need be, or even centre bounces.

In terms of her upside, Featherston’s raw ability between her contested marking, penetrating kick and ability to hit the scoreboard from range make her a really damaging future prospect. At times she can lack some composure when in range on the ruck, often disposing of the ball when she had more time, but her overall ability is evident. If she can continue to develop that area and learn when to go and when to size up the options, she will have greater scoreboard impact.

“Standing at 169cm you would not expect someone to be listed as a ruck, but such is Featherston’s leaping ability that she has indeed become a secondary ruck at NAB League Girls level. Pinch-hitting in there to average 4.3 hitouts per game, Featherston is at her most dominant around the half-forward line where she can lead out, clunk grabs and show great courage in the air or at ground level. Whilst she could improve her composure around goal – she had plenty of chances that were opportunities which went begging – her ability to have so many chances and create opportunities is impressive. She is a raw talent with plenty of upside, and with a long, penetrating kick and strong hands, she is a valuable addition to any forward line.” – Peter Williams via “2021 AFLW Draft Positional Analysis: Tall/Medium Forwards”

“An supremely athletic player, Featherston was one of the most exciting players in the competition this year. Although not racking up huge numbers, with Featherston’s athleticism there’s clear scope for development. Her leap and speed proved two key features of her game, resulting in her being a rotating ruck despite measuring up at just the 169cm. Featherston’s aggression on the ball carrier was also quite impressive, not always landing the tackles but often forcing a mistake with the pressure she created. She impressed in her three Vic Country games, playing more as a permanent forward.” – Declan Reeve via “2021 NAB League Girls team review: Geelong Falcons”

“The dynamic and athletic Falcon was tried in numerous roles, as she has been for most of the season, and finished as one of her side’s most consistent performers. Starting in her usual forward post, Featherston was a solid target for Geelong when they broke forward quickly, with her agility and poise allowing for eye-catching work at the drop of what was a very hot football. She made her usual move into the ruck and displayed a springy leap, cutting the size difference and competing valiantly at the coalface. She also attended centre bounces as a midfielder, showcasing her rare versatility. Overall, Featherston was one who looked to make things happen and her technique to spin out of trouble was great to watch throughout.” – Michael Alvaro via “Top Performers: 2021 NAB League Girls – Grand Final”