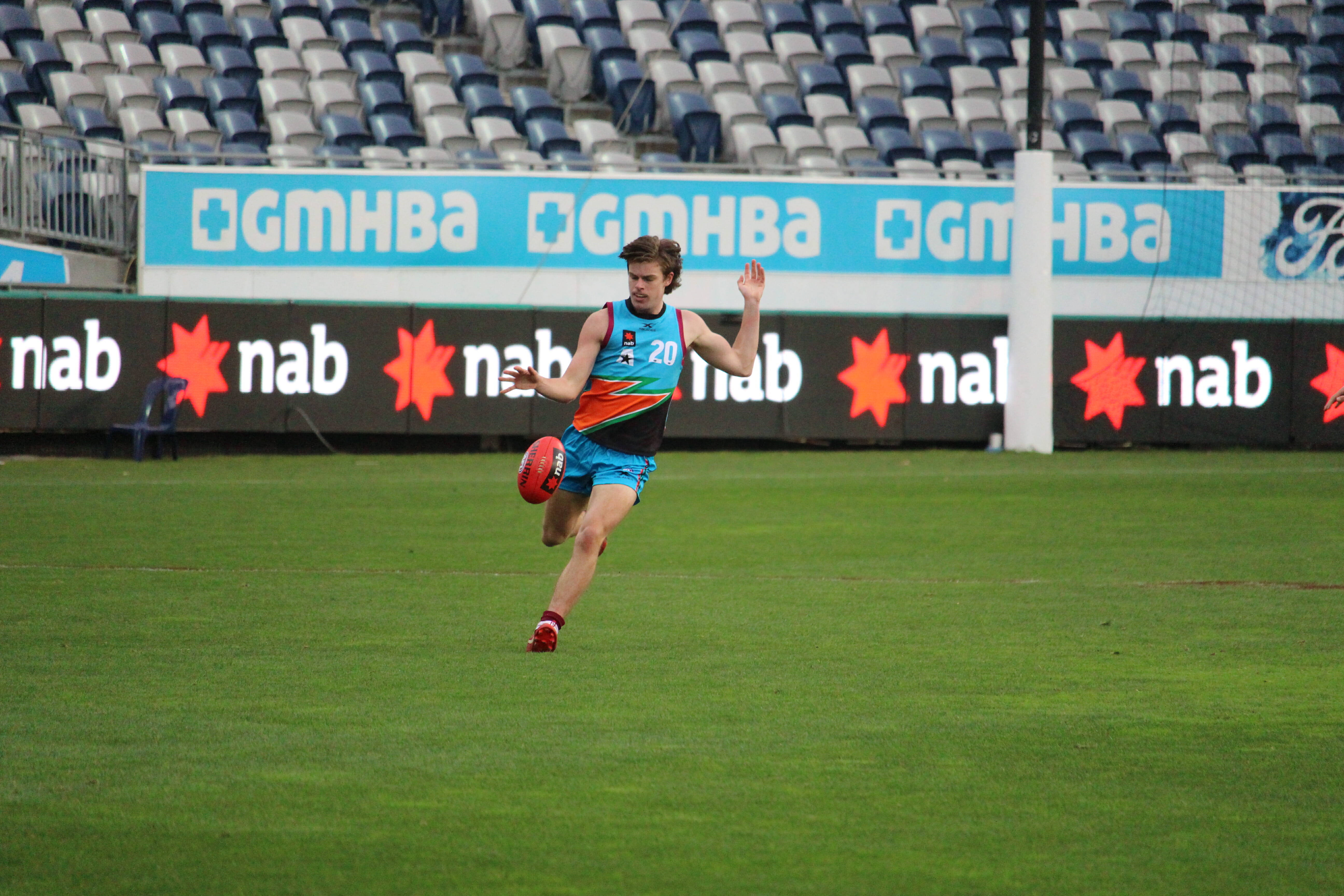 DRAFT ANALYSIS: "An outside runner who has great acceleration and endurance, and hits the scoreboard."

The hard-running midfielder from Tasmania has bolted further up draft boards as the season has progressed. Turner’s had a very consistent season and has caught the eye of many recruiters with his endurance and ball use on the wing. He impressed throughout the U18 Carnival for the Allies, with his natural ball-winning ability and scoreboard impact. In the Allies close defeat to Vic Metro, Turner accumulated a team-high 25 disposals, nine marks, three inside 50s and four rebounds. Turner is the perfect player for a club that is looking at finding a natural wingman that works hard and is clean by foot. Along with these attributes, Turner has a great endurance base, and can hit the scoreboard when going forward. He needs to build up his frame in order to have more of a role on teh inside, and also register more effective tackles, but as a whole, the slick Tasmanian mover is able to get free and hurt opponents on the counter attack.

Turner suits the needs of a wingman seamlessly, with his strong aerobic capacity and clean ball use. He runs tirelessly both ways, often finding the ball at both ends of the ground within a short space of time. Turner also has the speed and agility to weave through congestion, along with the ability to burn opponents on the outside. Throughout the National Championships, he was able to drift forward, hitting the scoreboard on numerous occasions, adding another weapon to his game. Players that have great endurance, clean skills and the ability to accumulate with ease, are some of the most valuable assets to a football club in the modern era. His ceiling is as high as anyone in the draft, especially when it comes to outside midfielders. If Turner continues to work hard at improving all areas of his game, he could turn out to be a really valuable footballer at the elite level.

At the National Draft Combine, Turner recorded a 21.4 in the Yo-Yo test (top 10), and a 2.976-second 20m sprint, both very high for the draft class showing he can run in spurts and do it all day long. His kicking efficiency at the National Under 18 Championships did not do him justice, recording a 50 per cent efficiency from his nine kicks per game average. He is more effective than the statistics show, while his hands in traffic are clean, finishing the championships with almost a 90 per cent efficiency by hand. His spread saw him average 5.3 marks per game (ranked equal sixth) and booted almost one goal per game playing predominantly on a wing, just getting forward when possible.

Turner is on the lighter side and will need to develop more physically, but as we have witnessed in the AFL this season, first-year players can still have a big impact immediately, regardless of their size. With Turner spending the majority of his minutes on the outside, he can find it difficult to gain sufficient tackle numbers in games, and this will be one area he will be looking to improve on as he develops. He’ll also be looking to improve on his ability to win the ball on the inside, with the midfielder winning the majority of his possessions uncontested. If he can do that, he will make his game more complete and he’ll become just as damaging in tight, as he is on the outside. Likewise, his tackle numbers at the championships were poor, laying just the one tackle, with Turner used rather for his outside run than his tackling, but it is another area he can build on.

Turner was one of four Tasmanians invited to the AFL National Draft Combine this year, revealing that there are many clubs interested. His endurance, ball use and the potential to turn into a consistent ball-winner that can kick goals, is far too good for clubs to ignore. The midfielder does have improvements to make to his game, but once he is able to bulk up his skinny frame, he can improve the other areas of his game to complement his classy outside ball-winning ability.