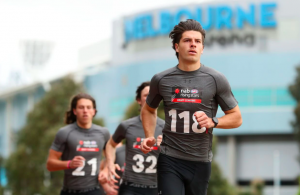 DRAFT ANALYSIS: “With an incredible package of speed, endurance, size and match winning ability, Rosman is one of the most intriguing prospects in the 2020 AFL Draft pool” – Ed Pascoe

One of the many Sandringham Dragons prospects not selected in the AFL Academy to get a national combine invite, it was Rosman’s stellar preseason trial game against Oakleigh that really put him in recruiter’s minds. Rosman was an excitement machine playing up forward and on the wing, using his dash and flair at any chance he got. It was an improved performance on his two games the year prior and it would have been great to see more outings like this one, but COVID put a halt to those hopes in what would have been an intriguing year for Rosman whose best looks very exciting.

Another Sandringham player with a lot of upside, Rosman was 192cm last year but is now 194cm and could still grow a little more as well; with his speed and reach on the lead, that extra height could be handy. With a frame to build on and a bucketful of natural athleticism and x-factor, the potential Rosman has is on the very high end. Rosman’s athleticism was certainly on show at the combine with some eye-catching results; notching 2.90 seconds in the 20m sprint and an incredible 5:52 time in the 2km time trial, which was two seconds behind the previous record breakers Jay Rantall and former Dragon, Finn Maginness before Harry Sharp broke that record again. Regardless, both of those results are elite for Rosman and they are a very rare combination to have. His leap tests were solid at the start of the year and he certainly likes to jump at the ball when marking.

That speed and leap works for him on the lead as he is hard to stop and can take a clean mark overhead. He is certainly the type of player to burn his opponent on the lead as he will have the speed to worry the bigger defenders, and the height and leap to trouble the undersized types as well. With that endurance he could add a lot to his current role, especially given the high demand for running in the modern game for forwards and wingmen. Although not a regular tackler, he can chase down tackle when he is around the play and that could certainly help round out his forward game if he hones in on it.

Being able to provide run and carry is another good trait that Rosman has. He is not afraid to take the game on and quickly fire out a handball while continuing his run to link up. Give him an inch either up the ground or inside 50, and he will certainly cause havoc. Although his kicking can be a little inconsistent, that long left foot can really break the lines and he is very capable of hitting the scoreboard from many different avenues; either from marks, at ground level, or on the boundary.

Although his game against Oakleigh at the start of the year was a very promising showing, his two games last year were not the most productive. With a seven-disposal and 11-disposal game minus any goals, this year would have been a good chance for him to improve on that production being played in a more prominent role in that Sandringham lineup. Rosman has been building his frame but he is still easily out-bodied at times and is not as strong over the ball as others. As a 194cm forward he plays more like Jaidyn Stephenson in the medium forward role and if he could improve his frame and work on his contested marking, it could make him a genuine third tall option up forward.

The upside is enormous with Rosman, standing at 194cm with a strong speed-endurance mix which clubs are always on the lookout for. Rosman is not just all athleticism though, he also has some football traits that are very exciting and with a full season he could have certainly been one of this year’s draft bolters. But with so little gametime to go off for recruiters, he may go late or even be given a full year in the Under 19s next year, but it will be risky for clubs later in the draft to pass on him when he could go very quickly to a club next year. Rosman was set for a strong year with Sandringham and Wesley College, so it is a shame he did not get to fully prove his worth as a top-ager.