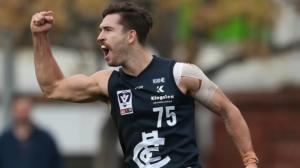 A unique story in the sense the 22-year-old was playing out at South Croydon in the Eastern Football League (EFL) 12 months ago where he first attracted the attention of recruiters. Fast forward and the athletic midfielder has been an impressive VFL player for Northern Blues this season, showing off his high footy IQ throughout games. He has to build up his skills but has great upside which has been showcased in his steep rate of improvement thus far. Anderson donned the navy blue for 12 VFL games this season in a year interrupted by an untimely shoulder injury and suspension, but he carried on among a raft of Carlton-listed players to solidify his spot in midfield – averaging a tick under 20 disposals, 5.4 tackles, and 4.3 clearances per game. In such an even draft, Anderson’s mature body and upside could see him get his chance in a side looking for readymade midfielders. Also has leadership quality having captained the inter-league Vic Metro squad at 20 years old.