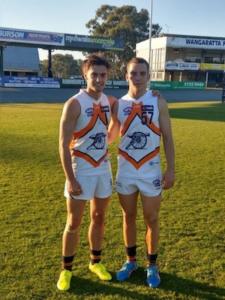 NOT much is known from a NAB League perspective about Evans, who came into the Cannons’ line-up for three games, booting five goals from 29 disposals and 12 marks after coming from local footy at the start of the year. He is clean at ground level and overhead, and is able to work hard to apply scoreboard pressure. He has to add to his smaller frame and build his endurance, but showed some great signs. He is a somewhat unknown quantity against his peers at NAB League level, but showed he is more than capable of matching them at his best. He is clever overhead for his size and could be that smaller forward who eventually pushes up for a midfield role once he develops his endurance base.