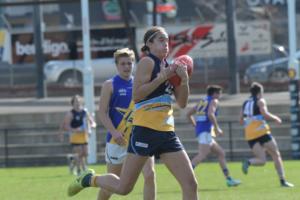 DRAFT ANALYSIS: "A developing talent with some draftable qualities such as his vertical leap and class, Perez missed all of 2019 with an ACL injury, and will hope he has done enough in his bottom-age year to earn a spot on a club's list."

IN terms of Victorian prospects, Flynn Perez is arguably the hardest player to judge in the draft crop. The reason for that is the talented midfielder injured his anterior cruciate ligament (ACL) during a training camp for Vic Country over the summer and missed the entire 2019 NAB League season, as well as the NAB League Fitness Testing Day, and National Draft Combine testing opportunities. So nearly all the data that anyone has to go off with Perez both on and off-field is from 2018, where he showed some really promising signs as a bottom-ager for the Bendigo Pioneers. What he did show in 2018, was a touch of class on the field, but just needed to build consistency going into 2019, something he was robbed of through his injury.

When taking a look at Perez on-field, his ability is often greater than his testing ability, with Perez showing nice athleticism to think his way through congested situations and dispose of the ball. While his pre-season 2018 20m sprint time of 3.09 seconds is not overly impressive, he shows it out on the field that he is able to gain separation from opponents. He has the touch of class that you notice in moments that stands out, and while his kicking efficiency of 50.7 per cent from that season needs to improve, it is more of his consistency to dispose of the ball when under pressure and understand the time he has than a technical action as such. He did average just one third of his possessions at the coalface, but he worked hard to spread well around the ground and often find space on a wing or at half-forward where he could set his teammates up. He has a good vertical leap, recording 77cm at the same 2018 pre-season testing day, a number than no doubt would have improved over the past 18 months had it not been for his injury setback. Furthermore, his dedication to his recovery from all reports has been top notch with Perez providing great off-field leadership to the Pioneers and being a terrific person off the field while not being able to contribute on it. He has some terrific upside, which he will no doubt show once he is able to get back out on the park.

When delving into his areas of improvement, Perez first and foremost just needs to get back on the park and build his fitness. He averaged the 16.5 disposals in his bottom-age year for the Pioneers, and showed in glimpses just what impact he can have on a game. It was not across the full four quarters however, and as his efficiency suggests, he could make errors by foot at times. However his work with run and carry by hand was quite solid and with his high leaping ability and high ceiling, there is plenty of reasons to be excited about what Perez could produce at senior level. Of course given he has missed 12 months and been unable to show recruiters on-field that he has developed in those areas, he has no doubt been doing all he can off-field to get his recovery right and prove he can play a role within an AFL system in 2020. He is a long-term prospect who is no guarantee to be drafted given his injury, but he was highly rated coming into the 2019 pre-season, playing on Grand Final Day in the Under-17 All Stars match which suggested recruiters rated him in the top half of the draft. He looms as a second half of the draft to rookie pick with some great traits that can be further developed given more time in an elite system.