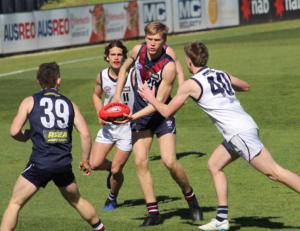 FISCHER McAsey announced himself at the Under-16 Championships with a five-goal game against Vic Country but it is down back where he has caught the eye this year with the talented key defender winning All-Australian honours at the national championships following in the foot steps of current stars Alex Rance, Michael Hurley and Daniel Talia as a key defender where he proved a handful with his intercept marking and ability to also shut down his opponent. McAsey was arguably better playing against the best opposition with his average of six marks and 14 disposals higher than his NAB League output and despite not winning a lot of the ball he looked strong down back playing against the North Melbourne VFL team which was the catalyst for his impressive performance through the championships. McAsey unfortunately missed most of Sandringham’s finals series and was a massive loss for his side, he also didn’t get to test at the national combine but has certainly shown enough to recruiters of his quality.

Not much gets past McAsey as he patrols the back 50, he is either under the ball taking a strong contested mark or flying in from the side, timing his jump and taking impressive intercept marks so he doesn’t just rely on his size to out-body his opponents. He can also judge the ball in flight and intercept brilliantly. Up forward he hasn’t been able to show what he can do often but he has shown to have a good set shot routine, time his leads well and is a strong mark on the lead. He could certainly play any either end being used not too dissimilarly to how Essendon use Cale Hooker and both are similar players both in size and marking ability. McAsey has shown good courage in defence going back with the flight and sitting under the ball with oncoming players ready to go through him but with his strong size he holds up well and should continue to do so at AFL level.

McAsey has some areas to improve, mainly his endurance which would need to improve to play regular senior football. Despite his readymade size, he is not blessed with elite speed or jumping ability like some top 10 talls have been, so he will rely a lot on his smarts and positioning to best utilise his talents at AFL level. The exception is his agile moment, because on-field he can shrug off tackles with a neat sidestep and get his hands free. A club that picks McAsey will most likely focus on his running capacity, but also view him as a long-term key position option. Unlike super athletic key position players, McAsey has the smarts to adapt his game at the next level, and it is easier to help develop athletic traits, than it is natural smarts – which McAsey has in spades. McAsey is usually a good decision maker and quick ball mover in defence but he has come unstuck at times trying to kick across goal or narrowly missing a target. Although he is technically sound in his kicking action and has a long raking kick when taking shots for goal, the error of his disposal by foot comes in the defensive half when he can adopt a play-on mentality to get the ball moving quickly. This can be really beneficial for game styles, but can also be costly at times, so building some composure when kicking out of defence will improve his game even further. Overall though, in terms of his complete profile, there is not too much to fault McAsey on when it comes to his on-field ability. He is set to be one of the first two key position players taken in the 2019 AFL Draft, and a versatile one with smarts who can play at either end which will no doubt be valuable for a club in the future.