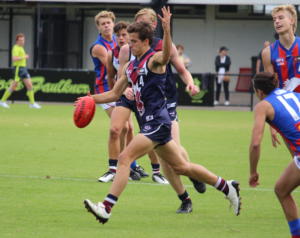 DRAFT ANALYSIS: “A hard working big-bodied midfielder who is excellent at winning his own ball and feeding it out but, also covers the ground well with his elite endurance.”

FINN Maginness’ stocks have risen with every month, the father-son prospect for Hawthorn was not on many radars at the start of the year but caught the eye playing through the midfield in the practise matches and only got better from there. A strong showing late in the year including a three-goal game against eventual premiers Oakleigh showed he could also hit the scoreboard and a sensational showing at the combine has put him firmly in the first round of the draft. He smashed the 2km time trial showing his elite endurance and despite not showing it consistently in games, scored sub-three seconds in the 20-metre sprint showing that if he could incorporate that speed into his game more regularly, he could become a very special player.

It has been a feature since the start of the year, but the combine made it known to everybody that Maginness has a fantastic work rate and unlike other midfielders who get most of their possessions around the stoppages, Maginness works hard to get back into defence as well as pushing up the ground to be an option forward of centre. His clean hands at stoppages work well with his core strength as he is difficult to bring down in a tackle and manages to keep composed to get a handball out nearly every time he wins the ball, he is a one touch player who rarely fumbles which makes his work on the inside all the more damaging. Maginness looks classy with ball in hand, but it is his work without the ball that has also impressed as he averaged five tackles a game in the NAB League. This was highlighted in the qualifying final against Eastern Ranges, laying 10 tackles and despite not winning a lot of the ball himself, showing he was willing to do the defensive work to make up for it which really highlighted his attitude. Maginness works well around the ground and uses his elite endurance to work back into defence to help his defenders, and you can certainly see why he would be favoured by his teammates as he always gives them an option around the ground and does a lot of the team things to go with his attacking attributes that make him such a highly rated talent.

His elite endurance does not always translate to big statistical games as he has only achieved over 30 disposals once this year in the NAB League – averaging 20 disposals per game. Despite not being bad numbers they are not at the level of recent top 10 prospects in previous years which is where Maginness can further improve. Maginness had four of his nine games with less than 20 disposals and he will want to work on his consistency at the next level to be a regular contributor, but at the very least he offers a strong defensive game. Maginness’ big area of improvement is his kicking composure when under pressure. When kicking for goal or with more time and space, Maginness’ technical ability is fine, but he at times tries to exceed his limitations when under pressure which produced some errant kicks. Not every player can be an elite kick, and Maginness has plenty of traits that stand him out from others, so sticking within his limitations and composing himself with his kicking under pressure will go a long way to rounding out his game better to become a more damaging player through the midfield.