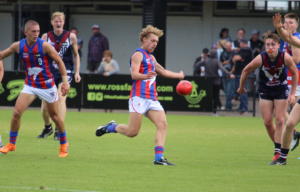 DRAFT ANALYSIS: “Macrae is a classy midfielder who you want delivering the ball inside 50; boasting great composure and the ability to kick efficiently on both feet.” – Michael Alvaro

Finlay Macrae is a prospect with great footballing pedigree, and you would gather as much just from watching how he plays. The half-brother of Western Bulldogs midfielder, Jack has a similar ball winning appetite to his elder sibling, able to rack up the numbers with high class. The 18-year-old Oakleigh Charger was destined for more midfield exposure in 2020 having spent most of his bottom-age year rotating off half-forward. It ended up working in his favour, as he was able to steadily develop across a range of roles and most significantly, among a star-studded team which took out the NAB League premiership. Macrae was also able to show his wares for Xavier College in the APS football competition, while turning out for Vic Metro at Under 17 level, being part of the Under 18 squad, and capping off his bottom-age season on AFL Grand Final day in the Futures All-Star showcase. He became a lock for this year’s AFL Academy intake and subsequently earned a National Combine invite, which proved his only real point of call this year. Despite being robbed of adding any top-age form to his resume, Macrae looms as a potential first round option.

Nearly everything Macrae does is laden with class. He is the kind of midfielder who can have a profound impact going forward, but not in the highlight-reel kind of fashion that more explosive or big-bodied types do. Instead, much of the 18-year-old’s impact comes through more natural footballing nous. Macrae’s combination of smarts and a sound running capacity works to allow him to move into ideal positions around the ground; where he can receive, quickly asses his options, and deliver with aplomb forward of centre. Many of his strengths, which are listed above, come to the fore in these kinds of plays and make Macrae exactly the player you would trust delivering the ball inside 50. He is simply so reliable and skilful in advanced areas.

The midfielder’s forward-thinking was perhaps made more prevalent by the sheer amount of time he spent in attack for Oakleigh during the 2019 season. But he was also able to showcase such traits while attending the stoppages, with his quick skills shining on the inside before he worked on the spread to chain possessions through the corridor. That kind of play gives him an accumulative effect, whereby he can rack up big numbers. Though he only achieved a disposal high of 22 (twice) last year as the likes of Matt Rowell and Noah Anderson stole the limelight, Macrae was otherwise able to achieve strong numbers through his knack of finding space around the ground. In a true showing of his potential, Macrae also managed 34 touches, six marks, five clearances, eight inside 50s, and a goal in his Under 17 outing for Vic Metro, playing a primary midfield role.

Looking at his quality in disposal, there are a few traits which work in tandem to form such an effective end product. His proficiency by foot is particularly evident when afforded time and space, though Macrae is capable of making equally shrewd decisions in quick time. A trademark play of his during 2019 would be to gather at half-forward, get moving towards goal, throw in a baulk of his direct opponent, and then deliver to a leading target. He would have racked up a good amount of goal assists as a bottom-ager, mostly through pin-point kicks to his forwards to create easy scoring opportunities. Adding to that quality is the fact that he is dual-sided, meaning he can dispose with equal efficiency on both feet. It is such a rare, yet massively important trait to have for a midfielder and makes him one who is not necessarily athletically quick, but rather in the mind.

In terms of improvement areas, Macrae’s lean figure and uncontested possession rate of 68.9 per cent in 2019 could have him pinned as an outside-leaning type. While he has the endurance base to impact on the outside or as a high half-forward, his lack of searing pace or an explosive turn of speed lends more to an inside role going forward. Macrae has a blend of traits similar to that of Sam Mitchell in that he evades through sheer awareness, vision, and smarts. Although, he has also been made to gain the capacity to accumulate elsewhere, much like his elder brother. Overall, the 186cm prospect has many attributes which point towards him being a 200-game AFL player down the line, with all the natural ability and game sense to succeed early on. His reliability on the ball and hunger to find plenty of it will also likely make him a fan favourite.

Given he is such a pure midfield talent, Macrae could well earn first round status come draft time. It would be easy to think his name carries more weight than it does but in reality, Macrae has earned such standing on merit. His effective disposal and ability to hurt the opposition by foot going inside 50 will appeal to recruiters, as well as his innate knack of finding the ball. Macrae’s previous experience of playing at half-forward is another big tick, as he may find himself starting out either in attack or on the outside upon entering the elite system. It means he should have little trouble adjusting to the top level, despite not having any particularly explosive athletic traits. A pick among the teens would be true to Macrae’s value, though he could prove a steal if he slides into the early-20s or second round.