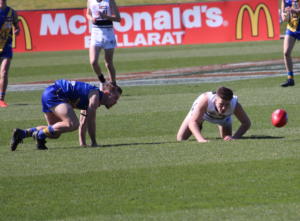 DRAFT ANALYSIS: “Macpherson is a neat user down back and crafty ball winner in midfield, aided by his fast-improving running capacity.” – Michael Alvaro

Ewan Macpherson is another strong talent tied to the Western Bulldogs this year; eligible to be taken under the father-son rule after his father, Stephen played 188 games for Footscray. The Northern Knights product is also the brother of Gold Coast’s Darcy, but boasts a few different traits to his all-action elder sibling. Macpherson has long been on the elite-level radar and captained Vic Metro during the 2018 Under 16 National Championships, before going on to make his NAB League debut in the same year. He proved a mainstay in Northern’s side as a bottom-ager, managing 15 games across a consistent campaign. Having cut his teeth as a small defender, he was looking forward to transitioning back to a midfield-oriented role as the Knights’ co-captain.

Outgoing Northern Knights talent manager Rhy Gieschen told of Macpherson’s marked improvement in his running capacity during preseason. The nuggety 179cm prospect shaved around 30 seconds off his previous best 2km time trial time to hit the 6:30 mark, while obtaining a 21.3 score in the NAB League preseason yo-yo test. It is something which will undoubtedly help Macpherson transition back into the midfield after his time in defence last year, with endurance somewhat of a minimum requirement for full-time modern day midfielders.

But Macpherson’s proven worth in a couple of different roles serves as a tick to his versatility, as he may not find himself among an AFL engine room from the get-go. His efficient short kicking game and clean hands saw him quickly adjust to the small defender role, while his tackling appetite and poise may also bode well for a role up forward. He looks a natural ball winner though, able to thrive at ground level and bring others into the game from the coalface.

A previous knock on Macpherson’s scope for midfield time was his endurance, and with that department on the incline, explosive speed may be the next point of call. While well-built and strong at the hips, Macpherson has been shown to use his agility, moreso than pure bursting pace to free himself from congestion. A player of his size is seldom able to consistently bare the brunt of extracting each week, so adding strings to his bow like breakaway speed and that endurance will only help him become a more well-rounded prospect.

Macpherson was a consistent figure for the Knights last season, and would have hoped to do so again as co-captain in 2020. After steady beginnings, he warmed to the competition well; not dropping below 13 disposals after Round 4 and averaging a tick under 17 disposals in the time between then, and season’s end. His reliability goes hand-in-hand with his leadership capabilities. While somewhat of a shy character, Macpherson is a figure others can look to for example-based leadership and he has already been recognised for that with captaincy at state and NAB League level.

Another area Macpherson may look to enhance is his impact per possession. While he has no trouble finding the ball and uses it sharply, being able to penetrate and damage the opposition with ball-in-hand looms as the next step. In fairness, that was not quite his role last season, but would have been a handy trait to show as a top-ager.

The Western Bulldogs have access to Macpherson as a father-son selection, and will hope any potential bid comes as late as possible given their rights to likely top three NGA talent, Jamarra Ugle-Hagan. Macpherson is not guaranteed to land at the Dogs though, as the same club passed on his brother, Darcy just a few years back. Macpherson’s invitation to the National Combine after being overlooked for the AFL Academy intake suggests there may be growing interest from other clubs, who could look to land the 18-year-old among an even 40-plus pool, or even in the Rookie Draft.