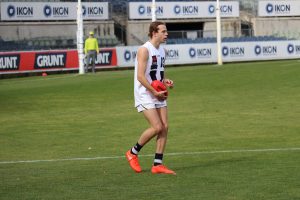 DRAFT ANALYSIS: "Ethan Floyd is a dangerous outside midfielder who has a great combination of endurance and skill, with just improvements on his inside and defensive games to take him to the next level."

Ethan Floyd is a player who one TAC Cup coach described as the Geelong Falcons’ most dangerous player. Floyd’s ability to win the ball in virtually any part of the ground, and his impressive combination of speed and endurance makes him a difficult player for any opponent. His has great kicking penetration and can send low darts inside 50 hitting up targets, or taking the risky pass into the centre square. Playing primarily off half-back earlier in the season, Floyd moved onto a wing later in the year and flourished, winning plenty of the football and being a damaging player on the outside. His inside work still has a fair way to go, while his defensive attributes such as his tackling numbers, could also be improved.

Floyd was one of the more impressive participants at the recent National Draft Combine, recording a time of 2.98 seconds in the 20m sprint at a 21.5 in the yo-yo test. These results placed him in the top 10 in both athletic tests, further enhancing what everyone knew – he has great speed and endurance. This endurance base allows him to cover the ground and win the ball in the defensive 50, through the middle or up forward, and his pace allows him to get away from opponents and burn them running forward. One TAC Cup coach warned his players not to allow Floyd to get goal side in the middle of the ground, and rather corral him along the boundary line, in order to stop him bursting away through the corridor.

Furthermore, Floyd’s ability to hurt opponents with his kicking penetration is another tick for his game. While under pressure Floyd can make the occasional error by foot, when given time and space, he can piece through zones, averaging almost four effective long kicks per game at TAC Cup level – ranking in the top 10 for the National Combine invitees. He will often choose to look further ahead and kick to a longer target, meaning he also has impressive metres gained stats, often running 30m and kicking it 40m. It is this longer kicking that is what makes Floyd such a dangerous prospect.

As good as Floyd is, there are still areas of his game which need to improve. He averaged just 28 per cent of his possessions in a contest, and is very outside, which suits his game style given he has that pace and endurance to burn off opponents over four quarters and in short bursts. Nonetheless he averaged less than a clearance a game and to take his game to the next level, he should work on both his inside game and his ability to dispose of the ball under pressure. His kicking efficiency sits at just 55 per cent which is poor for an outside midfielder, yet he is considered a dangerous user of the football. This is because when in space, he can really hurt opponents, but under pressure or corralled onto his non-preferred side and Floyd’s disposal by foot diminishes. He had six ineffective or clanger kicks to four effective short kicks in 2017, which shows that there is area for improvement.

Finally the other area Floyd could address is his defensive game. While his offensive game has enough weapons it can smooth over his defensive attributes, he can build up his pressure acts and tackling numbers further. A good comparison is teammate Matthew Ling, who is equally outside, but averages an extra tackle per game and is more known for his chase-down tackles. Not a huge deficiency in Floyd’s game, but an improvement nonetheless.

Ethan Floyd is a player who could be a great late value pick in the National Draft. He has the ability to run and carry, burn off opponents and piece through opposition zones. He covers the ground really well and can hit up targets over long distances. The challenge for Floyd is to improve areas in his game that are not as natural to him such as his inside work and defensive attributes. Finally, and arguably the biggest improvement will come if Floyd can improve his disposal under pressure, which will only come with time and more confidence. He has the attributes to be a first round pick, but the few question marks are what keeps him from being placed in the same area. How he develops at an AFL club will be key to his future success at the elite level.