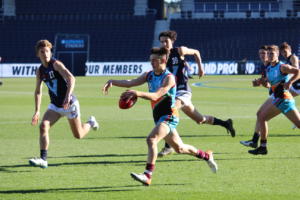 DRAFT ANALYSIS: “Gulden is a consistent performer with all the tools to be a successful player at the next level” – Peter Williams

Errol Gulden is a player who is not too far off the complete package in terms of ability. He ticks a lot of boxes, particularly for the role he plays, and whilst he can make some mistakes via foot, his overall impact, football IQ, athleticism and class stand out above all else. The one mitigating factor which sees Gulden rated lower than where he should be is that he stands at about 175cm, though considering his upside and ability, if he slides outside the first round, it will be a bargain for whichever team is able to snare the Sydney Swans Academy member.

Without a doubt the Sydney Swans would be excited to add the Academy youngster to their list. Having starred in the NAB League Academy Series last season as an outside midfielder, and then played as a forward at the National Under 18 Championships, Gulden has the versatility to go just about anywhere. Even in the Northern Academy series against the GWS GIANTS Academy this year, Gulden played off half-back and showed his trademark dash and class running down the field. He is one of those players that has more athleticism on-field than off it, with a 3.10-second 20m sprint and 8.55-second agility test at the recent NSW/ACT Draft Combine not indicative of his ability to create separation from opponents. The talented small utility is undoubtedly a natural footballer who also has the athletic traits to back it up, which is something that is rare for a player. If he was 10cm taller, no doubt he would be talked up in the top 10, and deservedly so.

As Caleb Daniel continues to show at AFL level, if you are good enough, you are big enough, and indeed Gulden shares plenty of traits with Daniel. His skill, class, vision and footy IQ are through the roof and for the Swans to pick him up somewhere in the late first or more probably second round, they are getting a bargain. His best position will be an interesting one as you expect he will play as a small forward at the elite level, then potentially go back as Daniel has to be that pinpoint passer out of defence. He reads the play so well and moves around opponents with ease, and during the NAB League last season, showed he has no trouble finding the pill either, averaging 27.3 disposals and 8.0 inside 50s. An endurance base which saw him run a 6:32 2km time trial showed he has the tank to compete for long periods of time.

Gulden has a lot of upside, but like every player in the draft, he still has areas to work on. He is a very outside-orientated player, but while his inside game could improve, he will seldom play in there, and given his skill and athleticism, he will always be one of those players utilised on the outside. He is tasked with taking those difficult 45-degree kicks or disposals that open the game up. Whilst it can pay off, the area he could improve is just that learning of when to play more conservatively in dangerous positions. With every damaging kick, he can sometimes bite off a bit more than he can chew and turn it over, which can often result in a score the other way on the turnover. It is the price teams are willing to pay for taking the game on, but is still an area he can iron out.

Overall, Gulden is a really consistent ball winner and performer, who has stood up when it counted. He might not be the prototype midfielder, but the skillset he has and the natural footballing ability is easy to see.

No doubt the Swans would be licking their lips if Gulden – as expected – can drift through to the second round. With Braeden Campbell‘s bid to come first – and possibly in the top 10 – Sydney will hope that the Gulden bid can slide down well into the second round. His value is arguably first round, but with a lot of clubs also tied to Academy players, and considering his size, Gulden will likely find a bid somewhere after 20 and one would expect the Swans to have no issues matching.