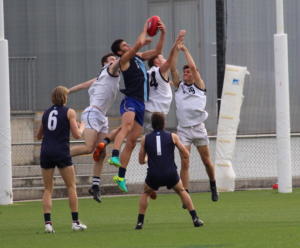 DRAFT ANALYSIS: "Jeka is a versatile key position player who is a terrific contested mark and will look to build on his consistency and adding more aggression to his game going forward."

A TOWERING key position utility from the Western Jets, Jeka has been a player who has been on draft boards since his Under-16 Championships where he impressed for Vic Metro as a highly athletic key forward who was further developed than many opponents. For a stronger player, Jeka has nice athletic traits with his overhead marking the most prominent feature of his game, and the fact he reads the ball so well in the air. He has always been a bigger player, but the first point of call for Jeka is furthering his aggression to really stamp his authority on the game, as well as improving his consistency within games. It is expected Jeka should find a home somewhere in the middle of the draft, with his traits good enough to earn him a place where clubs can develop him into a more dominant key position player.

Jeka is one of the best contested marking players in the draft crop with his clean hands overhead and ability to leap a feature of his game up either end. When forward, he leads strongly and can crash packs, though he could do it more often and let defenders know he is in the area. In defence he reads the ball well in flight and positions himself to bring down the grab and set his team up going forward. With ball-in-hand, Jeka is a nice technical kick of the football but sometimes he can take a second too long to dispose of it and ends up turning it over which is why his lower kicking efficiency of less than 50 per cent is not an accurate picture of what he is capable of. It would be easy enough for a club to develop the decision making area of his game to dispose of the ball quicker or make simpler decisions to avoid the mistakes. He is capable of a long booming kick and with his athleticism, Jeka certainly has a number of areas that will attract recruiters. Speaking of that athleticism, Jeka registered a 3.04-second 20-metre sprint time in the pre-season as well as an impressive 8.17-second agility test showing that he is more than capable of getting the job done at ground level and dishing it off or disposing of it quickly.

Jeka’s two main improvements going forward are his aggression and consistency, which will really transform his game and take him to the next level. As he showed in one quarter for Vic Metro against Vic Country in the trial game at Ikon Park, he is capable of winning a game off his own boot with multiple contested marks and goals in the final term in that game, after being relatively quiet for the first three. It is this aggression and consistency that has to improve, and if he starts crashing packs and presenting each quarter then defenders will start to hear footsteps when the 200-odd cm forward starts leading. Like most key forwards, some days you will not hit the scoreboard, but if he can continue to present and create leads, as well as force a spillage from a contest and restrict intercept marks, then he is doing his job. We have seen plenty of key forwards at junior level develop into key defenders at the elite level, and Jeka is already a step closer to that with the traits and experience to make that jump. If he can build on his consistency, then his athleticism, positioning and contested marking make him a really dangerous prospect inside defensive 50 as well. Overall, Jeka is one of those tall prospects who could go either way at AFL level, but with the raw athleticism and ability he possesses, then some smart development could see him take a giant step forward.