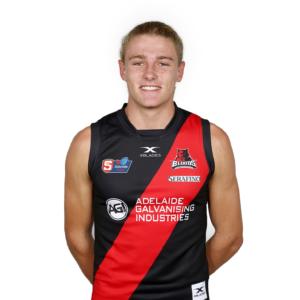 THE talented rebounding defender from West Adelaide recorded an elite kicking efficiency of 75.6 per cent in season 2019, averaging 19 touches over a consistent year in the SANFL League. While he could build more of an inside game with just 30.6 per cent of his possessions won in a contest, Dunkin has plenty of outside traits – such as his speed and footy smarts that make him a dangerous prospect coming off half-back for any side in the future. His size has improved and is much of the reason why the 21-year-old will have become more desirable, filling out to 78kg to make himself all the more readymade. Dunkin’s ability to rack up the ball as a rebounder was evident as he breached 20 disposals eight times in 18 games, while only dropping below 10 once having played in just two wins. Stringing state league form together is key for most mature-age prospects who break through, and Dunkin is on the road to doing just that.