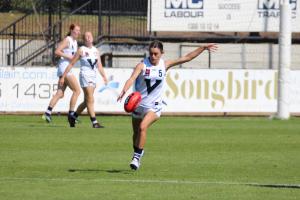 Elizabeth Snell is versatile midfielder/forward with some elite athletic and defensive traits who put together an ultra-consistent 2021 season across multiple competitions.

Elizabeth Snell has been a reliable member of the Bendigo Pioneers program over a number of years coming through the V/Line Cup, representing Vic Country at Under 16s level, and then becoming a valuable member of the Pioneers Under 19s program. Winning a best and fairest at the club in 2021 despite missing some matches due to VFLW and AFLW Under 19 Championships, Snell was a dominant ball-winner through the midfield and also converting goals on the run.

She earned a place in the Vic Country team this year and held her own through two games, and has featured for a strong Essendon lineup in the VFLW as well. What sets Snell apart from her peers is her combination of athleticism and defensive pressure, with a high focus on taking grass with ball-in-hand, and also winning the ball back through fierce tackles.

The one aspect she can tidy up for the future is her execution by foot, sometimes rushing when she has more time, or just desperately belting the ball forward. Snell does have that superb burst to create separation on her opponents, and she can sidestep oncoming traffic as well, and when the shoe is on the other foot, Snell is able to wrap up opponents and win free kicks for her defensive pressure.

At the top level, Snell would be suited to play inside 50 with those traits of athleticism and defensive pressure, as well as her smart goal sense, though she could roll through the midfield over time. If she can iron out the execution then she could become more damaging, as she has already shown she can hit the scoreboard multiple times inside 50, and find plenty of the ball in transition. Her work rate and spread will hold her in good stead for the future.

“After not getting a Draft Combine last year, Snell stepped up to have a huge season with the Bendigo Pioneers, showing off the traits she has always had, but with greater consistency week to week. The thing with Snell has always been having some seriously top-end traits when it comes to her athleticism – particularly her speed and evasion – and tackling pressure, but it is about building on other areas of her game such as her accumulation and kicking. Whilst her kicking is still an area to keep building on, her numbers went through the roof this year, averaging 20 disposals to go with her 8.8 tackles per game, prompted by a move into the midfield. She showed she can handle any level, averaging 16.5 disposals and 8.5 tackles for Vic Country, and 12.8 disposals and 8.0 tackles for Essendon VFLW. Simply a tackling machine.” – Peter Williams via “Draft Central AFLW Draft Power Rankings – Victoria Pool: June 2021”

“Snell was one of the more productive Bombers on the day, and whilst some of her kicks might not have been as accurate as she would have liked, she was clean in close, and had a number of impactful touches. Most importantly, her defensive pressure – as expected – was incredibly high, and she would have been one of the most prolific tacklers on the ground. She did give away a few free kicks through tackles, but her intent was right, and she was well supported by her teammates.” – Peter Williams via “VFLW Player Focus: Elizabeth Snell (Essendon)”

“Was incredibly busy in the first half, having an number of early touches and driving the ball forward inside 50. A couple of her kicks were rushed, but she kept pushing and attacking the contest hard, also attacking the loose ball or an opponent with ball-in-hand. She spread well to win the pill on the wing late in the game, and applied the defensive pressure throughout the match.” – Peter Williams via “Top Performers: 2021 AFLW U19 Championships – Monday, April 12”