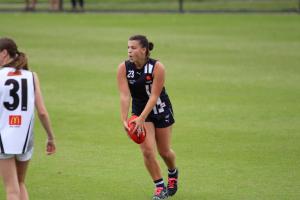 Elizabeth Dowling is a powerful defender who can lock down on an opponent and nullify them defensively, or provide some run and carry out of defence.

Another Geelong Falcons talent who has come through the V/Line Cup program right up to the Under 19s side, Elizabeth Dowling has been a name to watch progress over the years.  She earned her place as a Vic Country representative after a solid year with Geelong Falcons.

Possessing some great strength and an ability to win one-on-one contests, Dowling is very reliable overhead and an aggressive tackler, not afraid to put her body on the line. She has some areas of improvement which she has focused on throughout the 2021 season, but is still a reliable player who can step up to play a multitude of roles in the defensive 50.

At the start of the season, Dowling said her kicking and endurance were key areas to develop and ones that are continually building. She has the power and ball-winning ability to move into other roles around the ground, but will be keen to iron out the kicking further and continue to increase her tank. In terms of her strengths, there are plenty of traits that lend herself to playing in the defensive 50. She can clearly pull down some strong marks, and attacks the contest with vigour.

When it comes to one-on-ones, Dowling is hard to beat, and she has power that helps her fend off opponents, or bring opponents to ground in fierce tackles. She can do the team things as well as provide some movement in transition out of the back 50.

Whilst others might win more of the ball, when Dowling is at her best, usually her opponent is shut out and the Falcons defender is aiding her teammates in driving the ball out of the back 50. Overall, she is one to watch from a defensive point of view.

“The Geelong Falcons defender has been a player who has progressed through the Falcons’ V/Line Cup program through to the Vic Country team and been a rock solid member in defence for a number of years now. In her Under 16s season, Dowling played nine games and showed plenty of potential, and has hardly missed a game since outside of Vic Country commitments, averaging around 11 disposals, four tackles and two rebounds per game. Not a huge marker, Dowling prefers to spoil and also win the ball one-on-one at ground level, or lay a strong tackle to wrap up the opponent or get it out to a teammate. She is able to use the ball consistently out of the back half, and is one who always puts her body on the line.” – Peter Williams via “2021 AFLW Draft Positional Analysis: Tall/Medium Defenders”

“Played with real intent throughout the match, Dowling was best described as ‘fierce’ for her attack on the ball and the ball carrier. She laid some big tackles, but also did the one percenters in the backline, taking a strong mark deep in defence in the second term, and provided some offensive run off half-back as well.” – Peter Williams via “Top Performers – AFLW U19 Championships: Monday April 12”

“Reads the game really well as a defender which allows her to be a threat in the air and on the ground constantly. Strong when running and carrying, getting around opponents without much trouble which makes her rebound game especially dangerous.” – Declan Reeve via “Top Performers: NAB League Girls – Round 8”