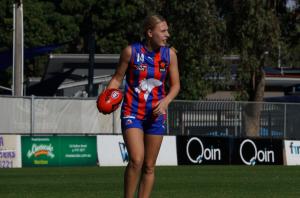 2021 Oakleigh Chargers premiership player Eliza James is a versatile prospect who can hurt the opposition in a variety of ways. The midfielder-forward has been a staple in her region’s squad for three seasons, providing a physical presence around the ball and constant goal threat to each game she plays. James returned a strong top-age campaign this year, earning Vic Metro honours and going on to crack Collingwood’s undefeated VFLW side in the lead-up to finals.

Oakleigh is a region noted for its squad dynamism, and James’ magnet is one which has shifted around the whiteboard across three solid NAB League seasons. Having initially cut her teeth as a forward, James enjoyed a shift into midfield during the first half of 2021, before freeing up others to roll through there as she rejoined the front six. Her best traits lend to both roles, proving big ticks for her versatility, selflessness, and ability to adapt.

While on-ball, James proved a capable ball winner at the contest by going full tilt at both ball and carrier. She would often burst away with her explosive turn of speed, generating useful momentum from the inside to the outer. When thrust forward, she presented as a viable marking target and brought the same attack at ground level, helping manufacture a diverse variety of chances on goal.

James’ most significant improvement areas revolve largely around her disposal. While she booted 12 goals across 21 NAB League games over the last three years, the 18-year-old could have had plenty more if for better finishing. Refining that ability to convert inside 50 will be a primary focus when employed as a forward, while sharpening her handling and kicking as a midfielder would also aid her ability to be even more damaging.

Overall, with her size and athletic acumen, James is a prospect with great potential. She can continue to add polish to her game, but offers plenty of upside as a midfielder who can hit the scoreboard and generate chances for others.

“Possessing good burst speed and agility, James showed her worth as a medium forward, but has some work to do with her finishing on goal. To her credit, James often looked to give the ball off to teammates inside 50 when she had it rather than blaze away, showing off a selfless approach that led to much of the Chargers’ attacking proficiency. Another Vic Metro representative, she was a key link up player in their fixtures.” – Declan Reeve via “2021 NAB League Girls season review: Oakleigh Chargers”

“A key figure in Metro’s forwardline, the usual midfielder showed nice signs of adjustment to her representative role. She used her strength in one-on-one situations to compete both aerially and at ground level, while also presenting well as a viable target. Having finished with four behinds from about a half-dozen attempts, it was a day of ‘almosts’ for James, but her work to create such opportunities was notable.” – Michael Alvaro via “Top Performers: 2021 AFLW U19s National Championships”

“Although she did not finish with the numbers of others, James was an important part of Oakleigh’s forwardline once more. She’s a powerful type who competes well aerially but also has natural ball winning nous given her time as a midfielder, making her a tough match-up. She proved as much with consistently strong presentation on the lead from half-forward, and some handy passages on the way back towards goal, which helped the Chargers link inside attacking 50. James later got a run in the midfield, having completed her initial job well.” – Michael Alvaro via “Top Performers: 2021 NAB League Girls Grand Final”

“A good size and capable of hitting the scoreboard, James is a damaging prospect. She showed in her two games this year how she has developed both her offensive and defensive traits, and even as an Under 16s player for the Chargers, stood up in nine games and booted five goals. As one of a number of Chargers who were able to provide support to the top-end talent this year, James is another leader in the group to standout in her own top-age year in 2021.” – Peter Williams via “2021 AFLW U18s Ones to Watch”