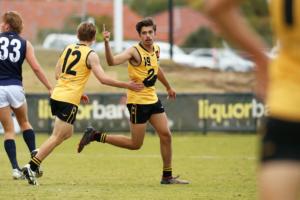 DRAFT ANALYSIS: “Taylor is a medium-sized forward who is raw, but has plenty of X-factor”

THE Thornlie Junior is one of the more exciting prospects in this year’s Draft Pool. With family connections to Tim Kelly, Paddy Ryder, Nicky Winmar and the Kickett brothers (Dale and Derek), Taylor plays with a natural instinctive feel, making him a dangerous threat when he is inside attacking 50. He was one of six West Australian prospects to make the All-Australian team this year on the back of a brilliant carnival for the Sandgropers.

Taylor can perform a variety of roles when he is stationed in the forward line, similar to how Collingwood young gun Jaidyn Stephenson plays. Like Stephenson, he can play one-out in the goal square due to his strong overhead marking ability, or he can play as a lead-up target. Taylor also boasts some of the best athleticism in this year’s crop of talent. In the agility test at the National Draft Combine, Taylor finished second overall with 8.005 seconds. He also demonstrated his natural agility against South Australia at this year’s Championships when he produced a double blind-turn that simply stunned his opponents before he snapped through a goal. Despite having some serious X-factor, Taylor is not the most consistent player in the Draft Pool – he can go missing in games. Once Taylor is in an AFL environment, you can expect his performances to become more consistent during game and week-to-week. Likewise developing greater versatility up the field, and building extra strength to his frame will also help him develop his game further. It is worth noting just this year, Taylor increased from 185cm to 188cm, and from 75kg up to 77kg. Given how rare it is to find a player with his skillset and upside, Taylor will be a much touted prospect who will likely go somewhere in the first two rounds of the draft.