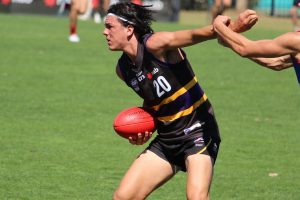 DRAFT ANALYSIS: “Hollands is a high impact-per-possession player and looms as the top midfielder-forward in the draft” – Peter Williams

Elijah Hollands is one of the most talked about prospects in this year’s AFL Draft and with good reason. Unfortunately the number one pick contender injured his anterior cruciate ligament (ACL) prior to the season, but then with the season cancelled the rest of the Victorian draft prospects joined him without any matches under their belts. He is a high impact player who predominantly plays half-forward, but can play deep or through the midfield, though never quite got the chance to fully develop on-ball given the problematic 2020 year.

There is a reason Hollands is considered among the top prospects in the country, with plenty of strengths and few clear deficiencies. Starting with areas of improvement, Hollands was robbed of further midfield development time this year and therefore still has only spent minimal minutes in the Bushrangers’ midfield. He also played forward for Vic Country in his bottom-age year so has not had the chance to develop that area of his game. Furthermore, the ACL will always bring about questions once he is up and running again, particularly for an athletic player such as Hollands who is so good at changing direction and sidestepping his opponents.

In terms of what he offers a club, the list is vast. Up forward, he is hard to beat as one of those medium-tall forwards who is just the right size to match it with talls or smalls. Against key position types he is too quick, and against smalls he is too strong. His body positioning in marking contests is terrific and has been known to hold off an opponent, protect the ball drop zone and even take it one-handed – such is his reading of the ball in a contest.

At ground level, Hollands is clean and able to grab it in one take, and more importantly, can instantly switch into defence mode with a high tackle count to accompany his offensive traits. His goal sense is arguably the best in the draft crop, being one of those players that can turn on a dime and slam home a goal from just inside 50. He had a few troubles with his set shots earlier last year in the NAB League and never got a chance to get a sustained run at it, but has shown that set shots do not often worry him.

Whilst Hollands is a right footer, he has been known to chuck it on his left and be just as effective. He can kick goals inside 50 on either foot, and whilst sometimes he might rush a tad through midfield by trying to use penetration and put it deep to a teammates’ advantage, he generally makes the right decisions with ball-in-hand.

In terms of his blend of offensive and defensive traits, Hollands is able to win the ball in multiple ways, and that includes back from the opposition via tackles or forced turnovers. It would have been nice to see him progress into the midfield in 2020, but he has shown enough playing up forward alone that he is worthy of a top five pick. With his athleticism, goal sense and high impact per possession, Hollands is a player who is a natural ball-winner.

Hollands is a star in the marking and certainly has not been forgotten when talking about the potential number one pick. In terms of the top-end talents, Hollands is the premier non-key position player and was a clear standout for Vic Country last year. Once he can get a full preseason under his belt, the Bushrangers’ talent will likely start as a deep forward and gradually work his way up the ground with time.