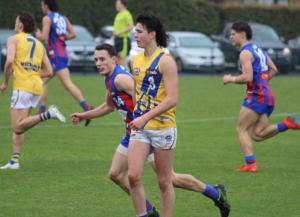 DRAFT ANALYSIS: “Ford is a highlight-reel forward who in time will look to progress into the midfield once he builds his tank and increases his endurance.”

Eddie Ford is a high-flying forward with plenty of upside and one who caught the attention of onlookers on more than one occasion. Quite often it involved flying for huge marks, including a number of them while trialling for Vic Metro, but Ford is also able to hit the scoreboard and hurt opposition teams regularly. While he would have liked to progress into the midfield this season, the Western Jets product has to settle with what he has achieved as a bottom-age forward.

Ford was unlucky not to make the final Vic Metro team as a bottom-ager, coming close after a solid outing – including one unforgettable hanger – in the trial matches. Growing up to 188cm by the preseason, Ford now is a genuine tall-medium forward and one who has the capacity to move into the midfield with time. Looking at his pure numbers, Ford kicked seven goals in 16 games which might not seem like a lot, but it is his work he does up the ground, where he would roam up to a wing, spend minutes in the midfield, then drift forward and make things happen inside 50.

As a midfielder, Ford showed some signs, but not enough just yet to suggest he could be a full-time midfielder, which is what his top-age year would have been used for. Unfortunately a delayed preseason impacted him some more and he would have been that forward-cum-midfielder to start the season, and then the season never got going. While needing to build his tank further in order to compete for longer periods of time, there is still plenty to like about what Ford offered in glimpses. His clean hands and goal sense for one, helped out by his vertical leap which allowed him to sit on opponents’ shoulders.

He has a lot of the pieces to complete a really promising player in the future. At AFL level, you would expect Ford to play forward in the early seasons before progressing into a midfielder down the track. As it stands, Ford has a high impact-per-possession and he loves a good goal or towering mark, knowing exactly what his athletic traits allow him to do. If he can build that endurance base and work his way into the midfield, then he has all the tools of being that exciting mid-forward who can impact in both areas of the ground.

For consistency sake, Ford is outside the top group of talents in this year’s draft, but he is not too far beyond them. On upside, Ford has plenty of talent to hit the next level, and is in that second round logjam. He is a player that has enough upside to suggest he lands somewhere, but it would have been great to see him test himself as a midfielder and finally make that Vic Metro spot for the National Under 18 Championships.