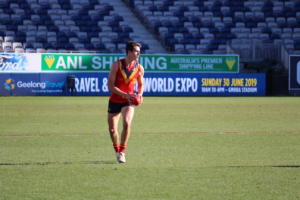 DRAFT ANALYSIS: "Hilder is a poised, composed key defender with outstanding ability to read the play and coordinate the rebound."

ONE of the South Australian Under-18 impressive rebounding defenders, Hilder showed at the National Championships he is capable of locking down key position types at either full-back or centre half-back, while providing rebound from the back fifty. Relatively late to football after being a junior soccer player, the North Adelaide player has shown consistent development over the last three years and pushed into the North Adelaide League side with three games this year. Hilder showed real poise and control with the ball-in-hand and also when the opposition are attacking the goals. Coupled with leadership as one of the vice captains for South Australia and some impressive National Draft Combine numbers for athleticism, Hilder has the scope to become a key defender for a decade in the Phil Davis mould.

At 195cm, Hilder is the right size to play key position. At the National Draft Combine, he also delivered personal bests in both the 20-metre sprint and the Yo-Yo test, and managed 6.38 in the 2km time trial. In the National Under-18 Championships, he was a key pillar in defence for SA (with Will Gould and Karl Finlay), and demonstrated an ability to read the incoming play and take contested defensive marks. It was then his composure to lead the rebound by linking up with team mates with hand or foot that stood out, and deservedly had him in the best players on a number of occasions. Hilder also has some versatility, playing in North Adelaide league pre-season trials as a midfielder, and also as a key forward and hitting the scoreboard, giving him a comparison to a Cale Hooker.

As a big man he will need to keep working on his ability below the knees to ensure that in defence he can be as effective as he is in the air on the ground, and in the post season has been working rigorously on his ground ball work. Also improving his agility will be important to allow him to get out of trouble at any location on the ground and then use his calm approach to execute the right option and becoming a more damaging player. Overall, Hilder has some great traits that will be adaptable to the next level and once he can develop those areas of improvement, he can progress to the next level and be just an influential at ground level as he is in the air. Given he tasted all three levels of SANFL football this year, Hilder is not too far off being able to compete at AFL level, and weighing in at more than 90kg, he is readymade to tackle opposition forwards.