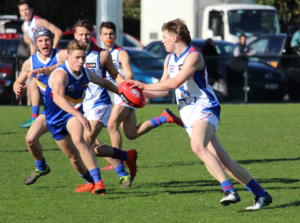 DRAFT ANALYSIS: "A damaging small forward at his best, Williams has all the hallmarks of being a serious player at the elite level if he can build his consistency and up his defensive pressure."

A SPECIAL talent, Williams is a player who burst onto the scene last year as a bottom-ager, lightning up the finals series and finishing the year with 26 goals from 16 games. Due to a combination of injury and form this year, Williams has not been able to rekindle his top form, but a full pre-season at an AFL club and fully recovering from the back stress fractures that ended his year prematurely should rectify that. A first round prospect on talent, he is not expected to fall too far outside the top 10, and will be great value if taken in the second round. He has a high level ceiling that could see him become a really damaging player in the air or on the lead inside 50, with his consistency, versatility and defensive pressure the key areas for Williams to develop going forward.

In terms of general forwards, Williams is arguably the top prospect in the 2019 draft with a high scope for improvement going forward. His goal sense and X-factor inside 50 gives opposition defenders headaches when he is on song. An example of his match-winning ability came against the Northern Knights when he booted two last quarter goals to win the Chargers the game, and had a similar impact against Eastern Ranges at Box Hill mid-year in what would be his last game, booting a goal right before half-time, and then the final goal of the game in the eight-point win. Along with his natural footballing ability, Williams has plenty of tricks athletically, with a terrific burst off the lead and sticky hands that make him clunk marks with ease. Williams is good for a contested mark per game and averages around the four marks per match. Additionally, Williams has a penetrating kick so can launch goals from outside 50 and is a reasonably reliable set shot for goal. While Williams has not had the most consistent year, he had a standout game in Round 13 where he booted 5.1 against Geelong in an 87-point win over the Falcons.

While previously mentioned that injury has had a massive impact on his year, there are still a few clear areas in which Williams can improve. The first is his consistency, because while he is a match-winner, like every small forward or X-factor player, he can play in patches. His best is incredible, while his lowest is unsighted. It is a case of just building some consistency within games and having more of an impact when not on his game. Williams has been tried in other parts of the ground including defence and through the midfield, with the onball venture showing he can have an impact around the clearances, but needs more minutes in there. The reason for the switch to defence was to add more defensive pressure to his game, averaging just under two tackles per game, but when forward, averages about one per game. In that five-goal haul over the Falcons, Williams was at his best with three tackles and showing that he can apply the defensive pressure required of the modern game. If he can set that as the benchmark going forward, then he will be a more complete player. As a whole though, the improvements are areas that will come with good development at AFL level, and one can expect that he will build a reputation as a highlight-reel player who can kick some special goals and take some high-flying marks.