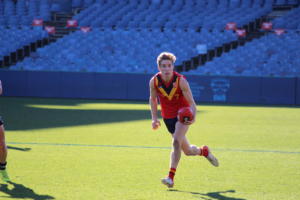 DRAFT ANALYSIS: “A ready-made midfielder with the potential to impact immediately thanks to his endurance and ball-winning abilities.”

TIRELESS runner Dylan Stephens has been one of South Australia’s most identifiable prospects in 2019 and his brilliant season been awarded with Under-18 All-Australian selection and Norwood’s McCallum Trophy Rising Star Award. Stephens made his senior Norwood debut in the second round after dominating in the opening round of the SANFL reserves, he went on to make a further 11 appearances alternating between commitments with the South Australian U18 side mid season. Stephens has showcased his brilliant outside game on multiple occasions and has also impressed when moved into the middle of the ground with his performance in the SANFL Reserves Grand Final testament to that. Dylan’s terrific skills align with his natural ability to break the lines, win loose balls around the ground, and burst away from stoppages when winning a contested ball. Stephens can follow in the footsteps of the South Australia talent of the previous draft year and seamlessly acquit himself on a wing in his first senior season.

Stephens was able to flash his natural abilities throughout the course of the SANFL and National U18 Championships. The final game of the National Championships saw Stephens have a blinding performance with a game-high 33 disposals that included nine clearances. Stephens pin-point kicking and inside 50 penetration was evident as the Allies could not stop his accumulation around the ground, with his neat left foot giving recruiters plenty to like. Another standout match came against Sturt in the SANFL elimination final which saw Stephens have no issues adjusting to a cut-throat final. It wasn’t his most prolific but his defensive component to the game was outstanding with the eagerness to chase, pressure and tackle. His outside game has been tremendous, the most obvious asset to his armoury so far and his earned him comparisons to AFL stars Andrew Gaff and Lachie Whitfield. Dylan’s continuous movement is supplemented by the capacity to lead up to the ball, break away from the pack and use the ball wisely when entering forward 50. Stephens is a superb athlete displaying his speed (2.97 20m sprint), endurance (21.2 Yo-Yo test), agility (8.24 seconds), and 2km time trial time of 6.01 minutes at the National Draft Combine. A typical improvement for a player in Dylan’s position is to add more muscle to his light frame to be able to withstand the rigours of football at the highest level, while building his contested numbers. He is likely to play that wing role at AFL level, but has shown he can play on the inside, but still with a high-leaning uncontested ball. In many ways, he could develop into that Steele Sidebottom type midfielder, where at times his contested possession rate could move to the mid-late thirties more so than around the one-third mark. Overall, given his skills, athleticism and work rate, Stephens is a standout midfielder, and the top outside-leaning midfielder in the draft crop.