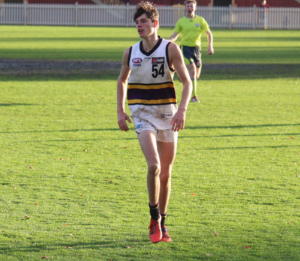 DRAFT ANALYSIS: “Bedendo is a raw and exciting forward who has elite athleticism and is just looking to build his overall game” – Peter Williams

Dominic Bedendo has a lot of the tools to be a damaging player, it is just about putting the pieces together to make it to the next level. Playing as a lightly-build medium forward, Bedendo has a huge vertical leap, great athleticism and a high endurance level that makes him a worry for opposition defenders. He is good above his head with his marking, and once he can add more muscle to his frame and become more consistent with his decision making, Bedendo will take the next step in his development.

The Murray Bushrangers’ raw talent has plenty to like in the way he goes about it. When it comes to testing, there are few who are better that the medium forward, who is similar to Sandringham Dragons’ Archie Perkins in the way that he seems to excel at all the tests. He recorded a whopping 99cm running vertical jump and impressive 2.95-second 20m sprint (October Draft Combine)  an 8.15-second agility test and a 21.2 yo-yo test (both preseason results) which are all considered elite across the board. What was most impressive was the fact he smashed his 3.07-second 20m sprint time, and even beat his 91cm running vertical jump from the preseason emphasising how much he had worked. His athletic traits, particularly his vertical leap, are shown in his game by his ability to rise above opponents and take strong, clean grabs. His marking is a clear strength of his, and he is able to use his athleticism to get to the right spots.

Bedendo is still learning areas of the game, with his decision making going inside 50 one of those areas. He went at 44.7 per cent by foot last season, but it was more about lowering the eyes than actual execution, aiming not to blaze away or rush the kick when he realises he has more time than he thinks. Likewise, weighing in at 74kg, Bedendo needs to add more kilograms to his frame in order to compete with stronger opponents, often knocked off the ball when he could not get a run and jump at it. When he could, then he would take it more often than not, and his ability to create space for himself and offer a lead caught the eye.

When talking about raw prospects, the other side of the coin is upside. Bedendo certainly has it, because he has already shown enough to earn an AFL Draft Combine invite, and despite having areas of improvement to work on, he has a strong foundation for AFL clubs to base their development off. He will be a winner on the track without a doubt, and it will be spending time in the gym and then working closely with coaches to continue his development. He has certainly come on in leaps and bounds at the Bushrangers, and it would have been fantastic to see him with another season under his belt at NAB League level. Regardless, Bedendo did himself no harm by establishing himself in the Bushrangers team in his bottom-age year, and gave spectators glimpses of what he could offer in the future.

Bedendo is a raw prospect with a number of areas to work on, so it would be anticipated he is viewed as a long-term prospect. As already mentioned he has the tools to succeed at the top level, it will be about whether or not clubs see him as a player they can develop into a mould they are looking for. He gets a huge tick for his athleticism and upside, and now it is about honing in on his areas of improvement and looking to build them up to be more consistent across the board.