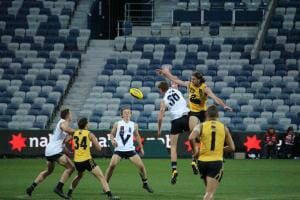 DRAFT ANALYSIS: "A strong marking key forward who reads the flight of the ball well and has strong hands."

Dillon O’Reilly is the son of former Geelong, Fremantle and Carlton full-back Stephen O’Reilly. Stephen played league 146 games for three teams between 1993-2000 which included 98 with Fremantle. However for fans of the Dockers, he fell two games short of the 100 game cut-off for father-son eligibility.

For many reasons that is a real shame for the purple army as key position players remain a problem area for the club. While admittedly still a bit raw, O’Reilly has plenty of tools at his disposal to be a very good player at the highest level.

While known as a key marking target, the coaching group at East Fremantle have added a deal of flexibility to his game by switching him to the defence end at times which he has taken to seamlessly. O’ Reilly was in the WAFL Colts team of the season along with being a member of the Sharks premiership side in 2017, and topped it off by being the leading goalkicker in the competition with 46 goals (including finals).

The old adage that the big guys do not get any smaller applies to O’Reilly. He measures in at just under six foot five in the old scale, and at 18 he still has the possibility to grow further. The added advantage of the versatile big man is his ability to pinch-hit in the ruck.

O’Reilly ticks a lot of boxes as he is able to read the ball in flight and can time his leap to perfection which is an art-form in itself. Accuracy in front of goal is a big talking point in modern football and the key forward has shown that he is adept at putting the ball between the two big sticks on a regular basis.

He is not afraid of the big stage, making his debut in the East Fremantle senior side at the tail end of 2017 which was not a bad effort considering he was a bottom ager at the time. The youngster created a piece of history of his own as he became the first player born after the year 2000 to play at the senior level. He did not look out of place in his two games kicking three goals and taking nine marks.

O’Reilly produced some more memorable moments in big games this season, kicking three goals against Vic Metro in the U/18s carnival and backing that up with two majors against the Allies. He was also instrumental in a come from behind win for the Sharks against old rivals South Fremantle in the elimination final this year. The swingman kicked six second half goals as the Bulldogs had no way to combat the key forward as they completed a stirring victory.

As is normal with someone of O’Reilly’s build, speed and endurance are not what you would assume are the main strengths for the youngster. However like most players in their fledgling years, they are the areas that he can work on and steadily improve. One thing all young forwards struggle with in the early part of their senior careers is the physical nature of defending. O’Reilly will come up against hardened bodies and will need to be prepared for the physical battering he will receive on a weekly basis. If he can add an extra 5-10kg to his frame, that would be ideal for someone playing in his position. While the body of work from the youngster has been excellent once again in 2018, a slight personal disappointment would have been his inability to take part in the AFL combine due to a shin injury.

O’Reilly’s placement in the draft really depends on the needs of the team and whether they require a key marking forward to add to their playing ranks. Tall forwards can be somewhat of a ‘long term project’ and clubs and supporters need to patient in their development. That said, O’Reilly has shown clear signs that he is not afraid of the big moment, has a large upside and a great deal of versatility to his game. In all, O’Reilly looms as a fascinating name to keep a eye on come draft day.