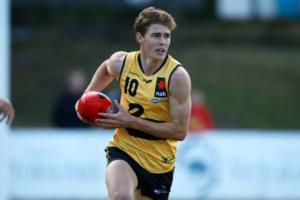 DRAFT ANALYSIS: “Robertson is a natural leader who thrives on the contested side of the game similar to how Richmond’s Trent Cotchin goes about his business.”

THE nephew of former West Coast captain Darren Glass, Robertson is one of the more consistent inside midfield prospects in this year’s AFL Draft pool. He accumulates possessions at will, thrives on the contested side of the game, uses his handballing ability to set up play from the stoppages and has strong athleticism. He may not be a goalkicking midfielder, but Robertson is hard-working and has an excellent work ethic which will endear him to his new team-mates.

Robertson first made a name for himself at the 2017 National AFL Under-16 Championships when he won the WA U16s MVP and was named All-Australian. He backed it up in 2018 with strong performances for both Perth and the West Australian Under 18s, but this year he truly established himself as one of the premier inside midfielders in the 2019 AFL Draft Pool. As the captain of the West Australian Under 18s, Robertson led the Sandgropers to their first AFL U18s Championships triumph in 10 years. He was named the All-Australian Captain, won the West Australian U18s MVP Award and won the Larke Medal as the best player in the Championships after he averaged 30 possessions (12 contested), seven tackles, five clearances, four marks, four inside 50s and four rebounds across the carnival.

Unfortunately, Robertson suffered a season-ending shoulder injury in the last game of the championships against Vic Country. However, he had done enough to wow recruiters and cement himself to be one of the first West Australian prospects picked at this year’s AFL Draft. He is comparable to Melbourne’s Nathan Jones. Like Jones, Robertson is seen as a respected leader, is excellent around the stoppages, has good athleticism and has neat skills – especially by hand. He also has a strong work ethic to work both offensively and defensively. In particular, his speed and agility is considered elite with a sub-eight second agility test and a sub-three second 20m sprint. The way he is able to win the ball and extract it from a stoppage is among the best available, and his ability to keep working hard throughout four quarters is a remarkable effort with his consistency a clear standout trait. In terms of his desire and inside game, there is not too much Robertson needs to work on, with his improvements to come from his outside abilities.

Compared to some other midfielders in this year’s AFL Draft pool, Robertson does not have the same finesse with his kicking, but once he is in an AFL environment this aspect of his game should improve. He also isn’t a proven goalkicking midfielder compared to other prospects. Despite this, it is worth noting that Robertson has strengths in other aspects and he will find different ways to help his new team win games of football. The major query on Robertson is his versatility. Despite being one of the stronger midfield prospects, Robertson has not shown enough that he can be deployed in the forward line or in defence if a team requires. Once he is in an AFL environment, his new team should help him work out where his second best position will be. Overall, Robertson is an inside midfielder who is strong in the contest and is as competitive as they come. He has bolted up the draft order on the back of a terrific national carnival, and while he has those improvements to make to his game, ticks so many boxes he is hard to ignore. With such a littered resume already, Robertson enters the elite level prepared to make an impact early on in his career and is likely to go on to become a proficient inside ball winner and leader.