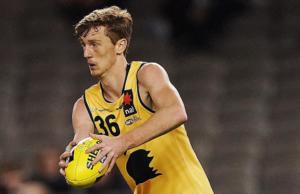 The leading key position defender among 2020’s potential AFL Draft pool is Grainger-Barras, a lean and versatile prospect who does his best work aerially. Having been a mainstay throughout the West Australian pathways and represented his state Under 18s already, the Swan Districts product has long been pegged as a top-end talent among a cohort stacked with tall stocks. The 18-year-old made his WAFL League debut as a bottom-ager, though it proved a short-lived outing as he had his season ended by a severe shoulder injury. Fast-forward to 2020, and Grainger-Barras picked up right where he left off, maintaining his senior spot for all eight of Swan Districts’ regular season games. Able to play a variety of roles down back, he looms as a safe pick well within the top 10 of the upcoming draft.

It is no secret that Grainger-Barras’ MO is aerial domination, with his combination of athleticism and a high footy IQ allowing him to intercept almost at will. At 195cm and with a sizeable vertical leap, Grainger-Barras looms as an ideal third tall option down back who can be let off the chain and allowed to float to each incoming contest. He is not restricted to that role though, with his closing speed and defensive nous also seeing him suit lockdown roles, as well as matchups against all body types. It serves as a massive tick to his defensive versatility, an important factor given he has seldom been tried on other lines.

Grainger-Barras showcased his range of skills in a particularly memorable clash with fellow top five draft candidate, Logan McDonald, as the two went head-to-head at WAFL League level. After McDonald booted three first half goals for Perth, Grainger-Barras was switched onto him and kept his statesman goalless after the main break. Not only did he quell his direct opponent’s influence en route a Swans’ victory, but Grainger-Barras also provided a series of individual highlights with his incredible courage and ability to mark overhead.

In that same game, and at times throughout the season, Grainger-Barras had been outmuscled by some of the competition’s bigger bodies. He is quite light for a key position player and that is certainly an area of growth for him, though he makes up for it in spades with shrewd positioning, sheer athleticism, and the willingness to compete. There’s a difference between being outmuscled and overawed, and Grainger-Barras takes it all in his stride, hitting the next contest even harder despite whatever heat may come his way. Another big tick, this time for his character.

With such a sound and well-rounded defensive game down pat, Grainger-Barras may also look to develop his offensive output over time. His eye-catching combine testing results (see below) in speed and agility do not always translate to his form going both ways, on-field. Sure, his vertical leap and closing speed are often utilised defensively, but further employing those traits going forward could take his game to the next level. Given he is so composed on the ball and uses it well, taking full toll with that mix of athleticism and footy smarts would make him one of the best defenders in the competition. He has shown signs of this, so hopefully there’s more to come.

On talent alone, Grainger-Barras is a top five prospect. When it comes to potential suitors in that range, Sydney (pick three) and Hawthorn look the most likely candidates, while Essendon would surely pounce on his services if he slipped down to their pick six. The 1-10 range is quite deliberately generous, though it is difficult to see the West Australian moving all the way down into double digits. He will be as safe a pick as any within that range and could well be one of two Sandgropers snapped up within the first five selections.