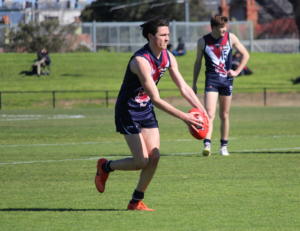 DRAFT ANALYSIS: "A big-bodied inside midfielder, Chirgwin had no problems overcoming a long-term injury by racking up an average of 24.7 disposals per game to go with his eight tackles and five clearances, with just his outside game to develop in order to match his inside talents."

WHILE many prospects take some time to recover from a long-term injury, Sandringham Dragons’ Darcy Chirgwin wasted no time in showing recruiters just what he could offer to an AFL club when he played his first top-age game this year. Missing for the first half of the NAB League season, Chirgwin returned in Round 11 in hope of scraping together a game for Vic Country – coming from the Geelong region made him eligible for Country rather than Metro – and dominated with 32 disposals. Over the back-end of the year, Chirgwin showed he can be that big-bodied inside midfielder who wins the hardball, feeds it out to teammates, clocks up the touches and clearances, and provides that defensive element with a huge amount of tackles. Like many inside midfielders, Chirgwin’s kicking can improve, while he could also hit the scoreboard more often. But from a pure inside midfielder perspective, Chirgwin has the traits to thrive in that role at senior level.

If anyone thought Chirgwin might be hesitant in his return game and take it easy to work himself back into it, you had to think again. The inside midfielder had 32 touches (20 contested), 11 clearances and 16 tackles in what was truly a mind-boggling return for a player who did not have any real match fitness to that point. It was enough to show Vic Country coaches he was worth a chance in the final Under-18 Championships game. Unfortunately for Chirgwin, he only lasted a short time into the match before he had the tracksuit on, injured but not for the same stint of time as his major injury. In his return game in Round 15, Chirgwin managed to rack up 24 touches (16 contested), seven clearances and eight tackles as if he had never left. It showed that regardless of setbacks, the talented midfielder constantly got up through adversity and never took a backwards step when out on the field. His size helped him be that dominant inside midfielder, and with his ability to win the ball, get it out of the stoppages and lay some big tackles on opponents, he has some clear traits that AFL clubs lacking that type of player would look for. To end the season, Chirgwin averaged eight tackles and five clearances, with more than 50 per cent of his 173 disposals (24.7 per game) coming in a contested situation.

Whilst his inside game is as good as nearly anyone’s, Chirgwin does have the outside impact to build upon. His kicking could certainly improve, averaging 48 per cent by foot in season 2019 for the NAB League. It is natural for players with such a heavy reliance on inside ball to be less effective on the outside, but nonetheless, Chirgwin could build that area up if he can work on becoming an equally damaging outside midfielder. Given his lack of match fitness this season, it is remarkable that he put up the numbers and had the influence he did, with a big pre-season over the off-season likely to set him up for the future well. Along with his outside game, Chirgwin could also hit the scoreboard more often, booting just the one goal in his seven games. Goalkicking midfielders are at a premium and with so many more experienced players likely to be in front of Chirgwin for that role at an AFL club, he will likely have to develop other roles he can have an impact in until he can slot into that position. Given his strength and ability to win the ball at stoppages, Chirgwin could be a damaging player hunting the ball inside 50, and is tall enough he could even provide a target on the lead if required. If fully fit, Chirgwin could play a role at AFL level in year one, he just has to get in a big pre-season and get his body right to go, but has the traits to have an immediate impact and could be beneficial for a title contender as good depth to begin with before ultimately grabbing a best 22 spot with both hands. Chirgwin would additionally look to improve his athleticism however, recording below average scores in the 20m sprint (3.18 seconds) and agility test (8.844 seconds) at the National Draft Combine. He is among those players in the mid-draft logjam, with Chirgwin potentially selected anywhere between the second and fourth rounds.