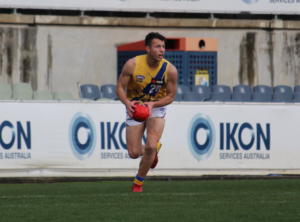 DRAFT ANALYSIS: “Having been tried across every line over three years, Cassar has solidified his status as one of the more effective outside accumulators in this year’s crop.”

DARCY Cassar burst onto the scene with a four-goal debut for Western Jets as a 16-year-old back in 2017, employed as a half-forward with good smarts inside 50. Since, both his haircut and style of play have changed drastically, with Cassar transitioning into a forward-moving wingman in his bottom-age year and starring as an accumulating defender for the Jets in 2019. Though he was thrust forward at times during his three National Championships outings, Cassar looked to have really found a home across half-back with his use by foot and composure on the ball able to come to the fore. The Keilor product averaged an even 23 disposals (14.6 kicks), 5.3 marks, 4.7 rebounds, and 2.5 tackles in 11 NAB League games to boost his stocks further coming off an 18-game bottom age season. His best patch of form came between Rounds 2-8 though, where he dominated in the back half to average 31.2 disposals – which proved hard to maintain upon coming back into the side post-championships. A highly-touted under-ager, Cassar’s home in this draft crop looks to be just after the second round as a player with clear strengths who can make an impact in multiple roles.

Cassar’s best traits were on full show in his early-season purple patch where he was able to sweep up a heap of ball in the back half and use his efficient kicking to hit both short and long targets on the rebound. His 41-disposal effort against Geelong Falcons was the peak of that form and came just at the right time – in the lead up to the National Championships – duly highlighting Cassar’s ability to create damage from his wealth of possessions in the back half. At the fore of that was Cassar’s sound kicking and the way he mixes his options, relieving pressure with easy short kicks to set up a counter or using his penetration to simply clear down the line. It also points toward his versatility, adapting to the move seamlessly after originally being touted for more of a mid-forward role at the start of the year. We were reminded of Cassar’s forward craft in his outing against Vic Country though, with the Metro representative slotting a shrewd dribbler early in the piece, while he moved up onto a wing many times for the Jets. Clubs love players who they can see fitting in just about anywhere, and it is no secret that Cassar can do just that.

We say just about anywhere, and that is because Cassar still has a way to go in terms of improving his inside game. His uncontested possession rate hovered at 65 per cent across each level this year, making him very much that outside type who prefers the flanks or wing. While his ability to create on the outer is valuable, Cassar is still unproven in terms of winning his own ball consistently. Still, he averaged 2.5 tackles in all three of his NAB League seasons, but will have to work on the defensive side of his game in order to become a more two-way and all-round player. Consistency is the other area of improvement for Cassar and while it may seem harsh given his awesome run of five games early in the year, he was a touch more patchy later on. His disposal high of 41 in the NAB League was countered but was followed late in the season by a tally of 11 in the Jets’ penultimate game. When he is not dominant, Cassar can also fade in and out of games too, popping up in smaller spurts of his usual form. If he carried on his form into the back half of the year and had a greater impact up forward, Cassar could well have pushed into first-round contention. But in terms of his upside and what he showed in the defensive half, he has plenty of traits for fans to look forward to in the future.