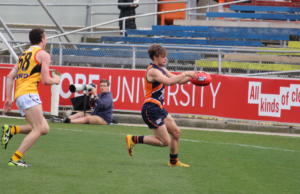 DRAFT ANALYSIS: “A classy and consistent midfielder able to win his own ball, but also find it on the outside where he can cause the most damage.”

DANIEL Mott had a strong year as co-captain of Calder Cannons, one of Calder’s highly rated youngsters from last year, there was high hopes for him in 2019 and he certainly performed as one of their most damaging and consistent players. Mott had a slow start to the year, but quickly picked up steam and hit his best form at the National Under-18 Championships as his contested game was questioned at the start of the year he put those queries to rest, averaging more contested possessions than in the NAB League, while also averaging amongst the highest clearance winners at the championships. Mott finished the year strongly highlighted with a 34-disposal and two-goal game against Dandenong Stingrays in the first final, which highlighted how dangerous he can be not only hitting up teammates inside 50 but also hitting the scoreboard himself.

Mott’s consistency was impressive with only two games at Nab League with less than 20 disposals, though both those games with 19 disposals. Whenever Mott topped 30 disposals, he also hit the scoreboard with two games included with two goals each. Mott uses his football smarts not only to win the ball at stoppages but also get on the outside in space and hit up teammates going inside 50, he averaged four inside 50s a game with most nearly always hitting up a teammate and he also showcased his kicking on either foot. Mott looks best with time and space as he usually makes the right decisions and his kicking is not only accurate but also long and penetrating and knows his limitations around the ground, a lot of his errors have been when under a lot of pressure as he is at the coal face of stoppages on a lot of occasions. Mott has an impressive vertical leap which was showed with a top 10 placing at the national combine, if he starts to use it in game he could be a problem up forward where he has shown an ability to hit the scoreboard at ground level.

Mott does not have the breakaway speed or agility of other midfielders in the 2019 draft, and that just means when playing inside, his disposal under pressure must be quick as he does not have as much time to use the ball compared to a damaging outside role. Mott improved his contested game as the year went on but where he shines is still on the outside where he uses his great kicking skills but with that lack of speed he needs another elite trait to maximise his output. His clean hands on the inside at ground level, or as the first receiver is still very good which has allowed him to do well in that role, but and an area to improve would be his endurance as he didn’t test at the combine as well as you would think given his disposal numbers, if Mott can improve his endurance to an elite level he could become a very damaging wingman at AFL level.