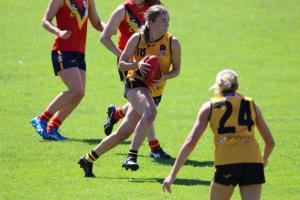 Dana East is one of the stories of Western Australia this year, with the 19-year-old coming into the Swan Districts and State Academy programs from local football and having an outstanding year. She became one of the most impressive inside midfielders, thrusting herself into draft contention.

Dana East has come a long way in a short space of time, but has most importantly showed she can step up at any level, having competed at state and national level against senior players and her peers. In the past 18 months, East has stepped up to show she is more than capable against better competition, and has become known for her incredibly clean hands and inside game. Able to win the ball at the coal face, East can shovel out the ball to teammates on the outside, or go herself with some great pace over the first few steps.

Her defensive pressure is another aspect, being a massive tackler averaging eight tackles per game at the 2021 AFL Women’s Under 19 Championships. Not a huge outside player, East does not need to be, also able to rest forward and hit the scoreboard on occasion, she can also kick goals whilst playing through the midfield. When she gets going, East is hard to stop, with great straight line running and the give-and-go hands to put pressure on opposition zones. By her own admission, kicking is an area the midfielder would like to build on, but is is something that given her role does not hamper her impact.

Going forward, East still has plenty she can build on, but what she has produced over the past 18 months is terrific and has really put herself into draft contention. Her athleticism, clean hands and defensive pressure all make her a well-rounded prospect and one of the best young midfielders coming out of Western Australia.

“I’ve been working on a lot of the contested work, just ground balls and marking and … clean hands basically,” she said. “I’m really trying to improve my opposite foot kicking, and just when you get the contested ball or something just to execute and hit a target.” – Dana East via “East shines out West in rapid rise through talent pathway”

“Another inside midfielder but this time as a top-age (almost) 19-year-old, East has come on in leaps and bounds in 2021 with her slick hands and contested ball-winning abilities. East was previously playing local football in Western Australia, but since stepping up to the WAFL Women’s and developing rapidly within the State Academy, the talented midfielder has been one of the most consistent players in the competition. Not only does she extract the ball well from the stoppages, but she can go forward and hit the scoreboard, often able to grab the ball at full speed and have the composure to execute by hand or foot quickly which makes her so damaging.” – Peter Williams via “Ones to Watch: AFLW Draft eligible surprise packets”

““She’s adapted to the game really well,” he said said. “She loves running straight lines, she’s a competitive beast, loves multiple efforts. “She loves the opportunity to get up in front of goal and put some pressure on in the forward line. “She relishes the contest, just loves to be in the contest.” – Adam Dancey (Swan Districts Women’s coach) via “East shines out West in rapid rise through talent pathway”