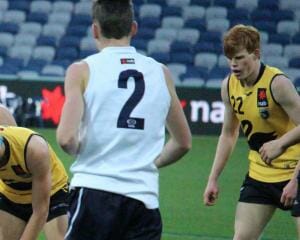 DRAFT ANALYSIS: “A medium sized defender with great skills, sound decision-making and a solid understanding of the game.”

A mainstay of the WA State teams since the 2015 Western Australian Under 15s State Schoolboys’ Team, Damon Greaves is one of the best defensive prospects from Western Australia in this year’s draft. He is a sweeping defender who reads the play exceptionally well, makes sound decisions and has a penetrating kick which leads to his side’s attacking forays. Despite missing some of the Championships and some WAFL Colts with an elbow injury, Greaves had already demonstrated that he has the potential to be a star of the future. He has plenty of attractive traits which will catch the eyes of recruiters, including his ability to read the play and dispose of the ball with composure and a penetrating kick. He is often camped out in defence taking strong intercept marks and using his high level endurance to work his opponents over.

Not unlike West Coast star Brad Sheppard, Greaves has the perfect balance between stopping his opponent from being dangerous, as well as being able to provide quality rebound for his team. His clean hands, reading of the play and strong intercept marking ability all enable him to pick off the opposition’s forward entries. He is that defender who you can rely upon to give you both good offensive movement, while remaining accountable. When bounding out of the backline, his ability to remain composed even under heavy duress and find the right option is outstanding for someone his age. He also has one of the best kicks in this year’s draft, and as such his drive is crucial to his team’s success. In the future it would not be a surprise if Greaves transitions into a silky wingman due to his elite linkage play.

With his body size, Greaves will need to put more muscle on to his frame to cope with the bigger bodies as he can easily be pushed out of one-on-one marking contests. This is an area that can be worked on at an AFL club with plenty of gym programs and trainers to further develop the area. He is a solid height at 186cm, but the 74kg will no doubt mean he needs some time to match it with the stronger forwards. Once he has added some more muscle and strength into his body, expect his contested marking to improve as well, which is another area of improvement for Greaves. He is a smart defender who drops into the hole and takes some good intercept marks, but body-on-body can be out-marked.

Damon Greaves has the potential to become a very capable medium-sized defender in the AFL. His intercept and rebounding play, combined with his “stopping” makes him an attractive prospect. While he is not in the top group of names that have been talked about in draft circles, he is predicted to be a mid draft prospect and a very solid get for whichever club needs a well-balanced defender. He might not walk into a Round 1 team due to his lighter frame, but with good development and working on his craft further at a state level against senior bodies, Greaves could make an impact in the short to medium future.