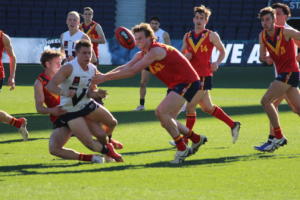 THE key forward/ruck from South Adelaide has been a dominant force in the Under 18s this year, too big and too strong for opponents each and every week. While he might lack that explosive leap and athleticism compared to some others, Freitag provides a contested marking force and ability to kick goals while resting forward or play as that permanent forward. That versatility enables Freitag to show off what he could do at AFL level, and while he does need to work on some athletic traits to improve his speed and movement at the top level, his frame allows him to rarely be beaten one-on-one. A possible late/rookie option for a club needing a key position prospect who has the strength already and it is just improving his athletic traits.