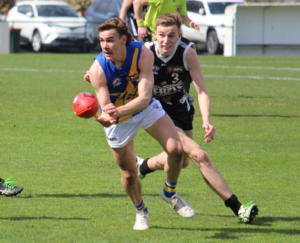 ANOTHER 19-year-old who returned to the NAB League Boys competition and was one of Western’s most consistent players this season, developing his inside game and adding a nice hardness to his outside speed and penetrating kick. He has a more all-round game than 12 months ago and while there are still deficiencies, he has come a fair way and will continue to work hard. When speaking about transformations in player profiles, last year Andrews averaged just 37 per cent of his possessions in a contest. In 2019, that number rose to a massive 51.1 per cent. His ability to change the way he plays and adapt to areas he was told to improve is credit to him. Andrews also bolstered his disposals (22.0) and bigger than anything, his tackling – which rose from a low 1.8 per game to an impressive 4.9 in 12 months. After missing out last year, Andrews has placed himself as best he can heading into the 2019 AFL Draft and from what he has shown so far, he is unlikely to stop striving to make it to the top level.

DRAFT CENTRAL’S INTERVIEW WITH DALY ANDREWS AT THE 2019 ROOKIE ME DRAFT COMBINE: