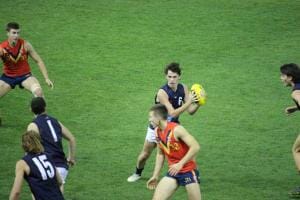 DRAFT ANALYSIS: “An energetic medium forward who is strong overhead and has serious match-winning capabilities”

Curtis Taylor is a player who has all the pieces of the puzzle, it is just a case of putting them together. The exciting half-forward is rated anywhere between the top 10 and second round. There is little doubt he has the capability of turning a match on its head, kicking multiple goals in a short space of time, but it is just that consistency that has not quite developed, to do it on a week-by-week basis. Taylor has quite a few party tricks in his arsenal and in terms of player comparisons, he is not too dissimilar to Jordan De Goey in the way that he can dominate in the air or at ground level and just outsmart and outmuscle his opponent. He has had some amazing highlights this season, but has also had some quiet games, and for Taylor, it is about closing the gap between his best and worst as to how far he can go with his AFL career.

There is no doubt Taylor is a special player. He is strong in the air or at ground level, has that great goal sense that worry his opponents into fumbling or making errors in the forward 50, while also having that innate term everyone loves to use, called X-factor. Taylor is exciting, he has a great vertical jump which saw him record a 76cm running vertical jump in the pre-season testing and it is clear when he gets a jump at it, his strong overhead ability and cleanliness with one-grab marking makes it very difficult for defenders to spoil. He has multiple ways of conquering goals, both from leading out, dropping back or crumbing a taller forward, and his versatility within the forward 50 has him as one of the most touted forwards in the draft crop.

Taylor has also spent time in the midfield, however as his endurance still needs to improve, he has predominantly done his best work inside 50. His kicking can be hit and miss at times, but his ability to create a scoring opportunity out of nothing in the forward half is what adds to his ability. He backs himself to win one-on-ones against any opponent and is that challenging player to match-up on because he is too nimble for taller players, and too strong for smaller defenders. Taylor is the type that will excite fans at the next level due to his ceiling and what he is capable of when he is “on”.

For all of Taylor’s exciting traits, there are still improvements to be made to his game. The first is building his endurance, which is still a working progress. He recorded 20.4 on the Yo-yo test in the pre-season, and spent more time in the forward 50 arc compared to the midfield for this fact. His endurance is another reason why his consistency is an issue, with Taylor floating in and out of games at times. In the final two games of the season against the Geelong Falcons, Taylor had a quiet start in Round 16, before kicking a couple of late goals in the final term. In the Wild Card Round, Taylor started strongly, but faded out of the game, albeit copping a knock in the final term. It is bridging the gap between his high production and low production games that is the biggest thing for Taylor going forward.

Curtis Taylor is a forward who can pinch hit as a midfielder and win a game off his own boot. He has the X-factor, the vertical leap, the strength overhead or at ground level, and the goal sense to have an impact early on in his AFL career inside 50. He does have to work on his endurance and build into four-quarter games, with some impressive quarters, and some quiet quarters, but he has all the tools to become a very damaging player at the top level. While he could go as high as top 10 or as low as second round, expect him to land at a club somewhere in between, with recruiters drafting him on future scope rather than current production – although his current production is still very impressive. One to watch long-term and enjoy with his highlight reel no doubt one to watch.