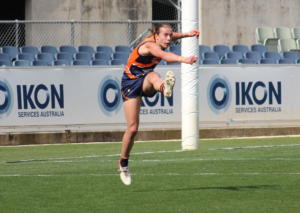 CURTIS Brown pieced together a consistent year for the Cannons in the NAB League off half-back. Not a massive accumulator of the ball, Brown has a piercing, penetrating kick, clean hands and a nice outside game, averaging 72.7 per cent by foot to be one of the more damaging players. He is an outside player who needs to provide more defensive pressure and build his contested game, but has draftable qualities.

He came onto the scene late with just two games in his bottom-age year, but solidified a spot in Calder’s back six this year as those promising traits were too hard to refuse. That was after turning out for Vic Metro in the trial games, with his form not enough to break into the final squad mid-year. Still, players with such penetrating kicks from the kick-outs or on the run are always valuable, and he could be a solid option with scope to add to his desirable traits given his steep rate of improvement thus far.