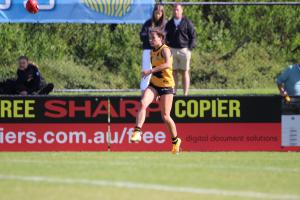 Courtney Rowley is a classy midfielder who can play anywhere on the field boasting serious talent and a mix of skill and speed. As Western Australia’s top ranked midfielder through the AFL Women’s Academy, Rowley is a talent that teams can build around with the progress she has shown since she was 15-years-old.

Having won a club best and fairest at 15, Courtney Rowley has always shown she can compete at senior level from a young age. A rising talent in the AFL Women’s Academy and Western Australia’s State Academy program, Rowley has traits similar to St Kilda’s Georgia Patrikios. She has the speed and evasion, clean hands and skills that make her so damaging, and the player you want the ball in the hands of going forward. A talent with so much upside, there are few flaws in her game and someone that will be one to watch for many years to come.

Rowley has been a star for Peel Thunder in the WAFL Women’s competition, and whilst injury ruled her out of a second successive flag, Rowley has been an outstanding talent for her club and state. Predominantly playing on the outside or off a flank at WAFL Women’s level, Rowley went inside for the AFL Women’s Under 19 Championships, and showed she could compete just as well there. A massive tackler with more than nine per game at the championships to go with 22.7 disposals, Rowley cemented her place as one of the best midfielders in the draft crop.

Class personified, Rowley said her main focus was her endurance and kicking on her opposite foot when moving, which are areas she has been knuckling down with this season. She is able to find space and drive the ball forward, and her disposal is sensational. With her athleticism and footy nous on show, Rowley is close to the complete player for her age.

“First game it was like the change of pace was the hard thing and I was like ‘woah this is so much quicker’ but playing against better players makes me play better so I love it. “The competition, everything, if I went back I don’t feel like I’d be able to play as good because I play better against better people.” – Courtney Rowley via “Rowley’s “crazy” ride only getting started”

“Yeah Courtney’s an interesting one, I’d like to have four or five of her because she can play all over the ground, but I love her on the outside because she runs and spreads and delivers inside 50,” “We’ve used her a little bit last year forward when she copped an injury and she was able to hit the scoreboard. “So at points we’ll drift her forward and she’s done some impressive things inside 50, so we’ll throw her around a little bit this year and just see what suits us best on the day.” – Steve Markham, Peel Thunder coach via “Peel prepares for 2021 after “whirlwind” season”

“Genuinely feels like there is nothing she does not do well, coming head-to-head with two of the best inside ball winners in the Champs, despite being newer to the inside role Rowley did not back down, taking it right up to her opponents to win a lot of ball and then handball to more outside teammates on the run. When she got on the outside herself, her usual speed was on show, happy to take on opponents and then deliver a well weighted kick forward, or a handball to a teammate further up the ground. Worked hard defensively as well, often going into the backline and applying pressure or winning the ball and getting it out.” – Declan Reeve via “Top Performers: 2021 AFLW U19s Championships – Thursday, April 15”