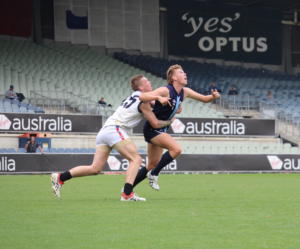 A best and fairest winner at Sandringham in his bottom-age year, Watts has some great traits when it comes to key defenders. He reads the ball well in the air, positions himself well and comes across to spoil or clunk an intercept mark. The concern or knock with Watts is when he does win the ball, like many taller players, he can make errors by foot. He works as hard as anyone, and while his ground balls are something he wants to continue working on – laying just 1.3 tackles per game – his aerial ability of 4.0 marks from 12.8 disposals this year is what makes him standout. He has great endurance for a tall with 21.3 on the yo-yo test at the Rookie Me Draft Combine and it helps him work over opposing defenders all game long. More readymade than most other key defenders, he has areas to build upon, but a number of traits that also catch the eye in the back half.

DRAFT CENTRAL’S INTERVIEW WITH COREY WATTS AT THE ROOKIE ME DRAFT COMBINE: