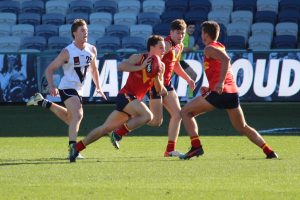 DRAFT ANALYSIS: “One of the premier pure smalls in this year’s cohort, Durdin is clean at ground level and tough over the ball.” – Michael Alvaro

Central District prospect, Corey Durdin put his name in lights as one for the future after taking out the 2018 Kevin Sheehan Medal during South Australia’s title-winning Under 16 National Championships. The 173cm pocket-rocket plied his trade as a zippy ball-winning midfielder at that stage, but has transitioned into a more forward-oriented role of late. Durdin has remained a mainstay among his state’s elite pathways, turning out thrice during last year’s Under 18 carnival, and strutting his stuff during the Under 17 All-Star showcase on AFL Grand Final day. His clean skills and defensive pressure have seen him thrive in Centrals’ senior side since earning a debut in 2019, going on to play nine more times as a top-ager before his season was cut short by consecutive hamstring injuries. The same knock kept him from testing at this year’s South Australian combine.

Durdin’s transition from an accumulative midfielder to a small forward has been made smooth by his prowess at ground level. The 172cm prospect is obviously low to the ground and strong through the core, but also possesses clean hands and the acceleration to have real impact at the fall of the ball. From there, particularly inside forward 50, Durdin is able to carve into space and often craft opportunities on goal, with finishing an ever-improving weapon in his arsenal.

Another particularly impressive aspect of Durdin’s game is his tenacity. For a player of his stature, he cracks in so hard and isn’t afraid to put his head over the ball. What helps is his natural ability as a pure footballer, leaning on his smarts and skills to make things happen once the ball is won. Given he has cut his teeth at senior level in 2020, Durdin’s toughness is something which may particularly entice AFL recruiters. His development at that level has been good to see, with his experience in 2018 allowing him to learn how to use his pace and smarts, rather than try to wrestle or out-strength more mature bodies.

That lack of size and strength is the obvious, and perhaps cheap knock on Durdin, but has been one of the main drivers behind his development as a forward. While most likely capable, it is difficult to see Durdin playing permanently through midfield at AFL level, but there are plenty of other roles for players of his size to thrive. With his ability to impact both high up the ground and close to goal, Durdin could suit a high half-forward role, much like Michael Gibbons (175cm) has for Carlton. He ticks a good number of boxes, with his deceptively high vertical leap another way he finds the ball inside 50 and around the ground.

Players in the sub-175cm category must have at least one elite weapon to make it at the next level. Durdin has a few high-level traits, which should put him in good stead come draft time. Given his late-season injury concerns, it will be interesting to see how he holds up under the rigours of AFL football. Although his permanent midfield scope is somewhat limited, there are plenty of other roles for a player of Durdin’s skill to thrive in and he should find a home come draft time.

Durdin’s list of accolades suggest he is a first round talent on paper, though others may have moved past him over the last couple of seasons. He is one of the many jostling among the range above, and will provide great value to a club seeking a small forward with handy points of difference. The second and third rounds of this year’s draft loom as very even, so the projected range has been deliberately left quite broad.