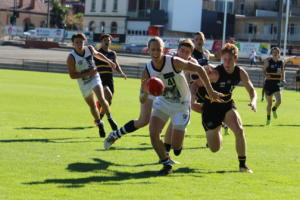 DRAFT ANALYSIS: "A tough leader who thrives on the contested ball who will look to build his outside influence within games."

A FIRST round prospect coming into the year, Geelong Falcons’ co-captain Cooper Stephens’ season ended very early after going down with a fractured fibula in Round 3 of the NAB League Boys season. It ruined his chance at playing for Vic Country at the Under-18 Championships, and despite hopes he would get back for the end of the season for the Falcons, was ruled out as not worth the risk. From his bottom-age year, he has quite a number of favourable traits but most of all is his attack on the ball, consistency and work rate. Having been out for such a long time, Stephens will need to rebuild his match fitness again, though his endurance is elite, showing off his gut-running ability with a 21.8 yo-yo test to finish equal first overall at the National Draft Combine. and then within the game work on his impact on the spread with low numbers of marks and inside 50s compared to other midfielders, with his best work done on the inside.

Outside game
Skill execution at speed

Given Stephens’ lack of games, it is hard to see how much he has developed from his bottom-age year with just the two full games which saw him average 25 disposals and kicking at 66 per cent efficiency with 59 per cent contested possession rate. It is not a surprise to see those numbers as Stephens generally uses it pretty well with the exception being when moving at speed. Sometimes Stephens can overcook the handball or kick, just putting it out in front of teammates to run onto, which is advantageous in terms of retaining possession, but ideally the next improvement is hitting the target directly. He can be a powerful kick, but he also just as damaging with his hands in close to feed out to midfielders, making right decisions with ball-in-hand. Stephens is at his best at the coal face, going down and picking up the ball to fire out quick handballs to a teammate running by, and he just manages to find space in close to do so. At 188cm and 83kg at the start of the year, and a season to build up even more during rehab, Stephens is readymade to play a role at AFL level. The fact that despite missing the year his endurance is still remarkable is testament to his ability and the determination he puts into his rehab work.

The long-term injury that ruled out most of Stephens’ season should not be too much of a concern for the club that drafts him, though he has inevitably slipped down the draft boards just because he has not been able to continue the form he built on his bottom-age year whilst others have put in strong seasons. Fully fit, Stephens is likely to be a value pick somewhere in that second round region, and will likely have an immediate impact which makes him tempting for clubs in their premiership window. He does tend to win so much of the ball at the coal face that the next step is getting free on the outside and lifting his influence around the ground which he started to do in the opening two games, averaging 4.5 marks and 2.5 inside 50s after he finished 2018 with 2.7 marks and 1.9 inside 50s. Given the need for midfielders to get free and play both inside and outside roles, it will be an area where Stephens can further enhance his game. But factoring in Stephens’ strong vertical leap – recording an 83cm running vertical jump at the National Draft combine – and his ability to run all day, the Falcons’ co-captain could become a player who rests forward and creates headaches for opposition defences. While his on-field credentials might not have been able to be shown this year, his off-field ones certainly have. Named Vic Country vice-captain despite being ruled out prior to the championships from playing showed just how valuable he is as a leader and could be a future captain in the competition. His leadership and consistency within games is something to be admired, and like any player with high wraps that misses the bulk of their top-age year, is one who could end up a terrific value pick.