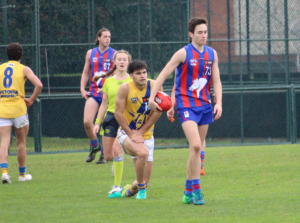 DRAFT ANALYSIS: "A smart and reliable goalkicking forward, Sharman has developed quickly over a short space of time, but still has a long way to go and will look to build his endurance and defensive pressure at the next level."

THE raw talent from Leeton, New South Wales made the trip down to Victoria where he was playing under Rodney Eade at Balwyn. Little did he know, by the end of the season, Sharman would be playing in a NAB League Boys premiership side, adding a different dimension to the Oakleigh Chargers’ forward six. He is still incredibly raw with a number of areas to work on, but is a natural footballer with a good size and traits that catch the eye immediately. Being one of only two overagers to receive a National Draft Combine invite, Sharman does have previous experience in an elite system, have missed out on a chance on the GIANTS Academy before making the move to Victoria. He has to build endurance and work on constructing a more versatile and well-rounded game as a whole, but his ceiling is incredibly high, and his X-factor inside 50 is among the best in the competition.

In terms of his work inside 50, there is not too much you can fault Sharman on. Earlier when he first entered the Oakleigh program, his defensive pressure was something that immediately could improve, after laying four tackles in his first three games combined. He improved that number against the Western Jets to lay four in a game, but then just two over the next three weeks, before three in the NAB League Grand Final. So now Sharman has shown he can produce the defensive effort, it is just doing it more consistently, which will develop with his endurance that has to come with more time spent in elite development. He has come a long way considering he would have been a fair way back compared to many of his draft peers, and bursting onto the scene in the first month since joining the Chargers gave draft watchers and recruiters a real glimpse into what he is capable of even against elite talents. Granted with the Chargers’ midfield it is happy days being a forward, but Sharman’s consistency at hitting the scoreboard – he booted goals in all game bar one, where he also spent time down back in that one – and always looking dangerous, never wavered.

Sharman has the footy smarts to not only kick goals himself, but set up teammates with deft taps to space for them to run onto, or unselfishly give off opportunities to teammates in better positions. He is able to find space inside 50 and exploit holes in the opposition defence, such as in the Grand Final where he found himself unmanned in the goalsquare to convert after uncharacteristically missing a couple of set shots. He only missed four shots in his 18 scoring attempts this season, which was just two from 15 heading into the NAB League decider. His best game came against the Eastern Ranges at Box Hill, where he booted four goals in a tight win, also picking up 18 touches and clunking six marks. His vertical leap makes him hard to beat, outmarking the athletic Emerson Jeka at the same ground a week later on his way to a couple of goals and showing he belonged. Sharman has the footy smarts to mark the ball at the highest point, which is why he is such a damaging forward when he has space in front of him. He rarely misses his opportunities and plays a simple game to influence a match. He has predominantly played inside 50 for most of the season with just a small stint in defence, so his versatility is another area of improvement. His 20m score at the National Draft Combine of 3.18 seconds is not indicative of his speed, with Sharman able to seemingly have a quick burst off the mark, and with that ability to mark at the highest point, causes headaches for opposition defenders. As a whole, Sharman has a long way to go in terms of development, but he makes the most of his opportunities, and is a very exciting talent inside 50.